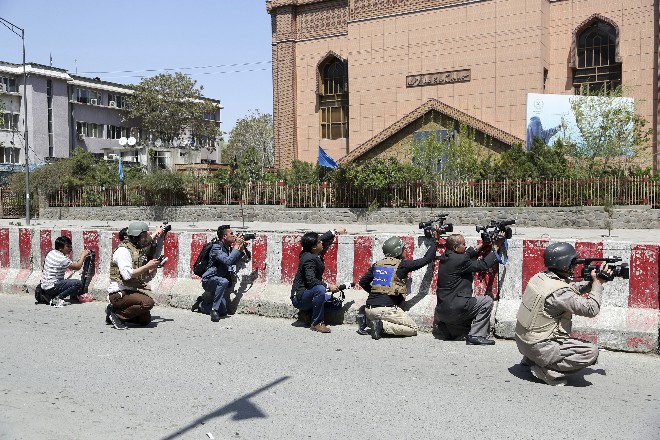 An Afghan media watchdog urged the government yesterday to heed a demand for more media freedoms after 30 local media outlets said in a joint statement that authorities were increasingly curtailing their access to information.
Sayed Ikram Afzali, the head of Integrity Watch Afghanistan, said there is a good law in place guaranteeing the media’s ability to work and access information but that the government has failed to provide enough funding and institutional support to implement the law.
The joint media statement, unveiled at a protest rally in Kabul on Tuesday, comes against the backdrop of relentless violence across the country. Afghan forces, backed by U.S. allies, continue to fight the Taliban, who today control or hold sway over nearly half of Afghanistan.
The Taliban stage near-daily attacks targeting government forces and officials, as well as those seen loyal to the government, and scores of civilians get killed in the crossfire, as well as in anti-Taliban operations by the Afghan forces. The U.N. has called for all sides in the protracted conflict to take better care to avoid civilian casualties.
Meanwhile, the United States is engaged in on-again-off-again talks with the Taliban, led by U.S. envoy Zalmay Khalilzad, to find a negotiated end to Afghanistan’s 18-year war that would allow the U.S. to bring home about 13,000 American soldiers.
“Throughout my tenure as the chief information commissioner, I have witnessed the media’s access to information being restricted by key government institutions,” said Afzali. “Unfortunately, the trend continues.”
Abdul Mujeeb Khalvatgar, head of the Nai Supporting Open Media group, said that access to information has been worst in the last five years and that the situation is now critical.
“If there is no access to information, then the nature of the media as a tool of freedom of expression will vanish,” he said.
Even as authorities concur that access to information remains a pervasive challenge for Afghanistan, they justify existing limitations by the persistent dangers and violence the country faces and warn that a return of the Taliban regime could do away with many hard-won freedoms.
Afghanistan is among the most dangerous countries in the world for reporters. In January, the Afghan Journalists Safety Committee reported that five journalists were killed in 2019 in the country. The year before, 17 journalist and media workers were killed in Afghanistan, when a total of 121 cases of violence against journalists and media workers were reported.
“There will be no set-back in our freedom, our gains in freedoms and women’s rights are irreversible. They have been our red-lines in our talks with the Taliban,” Sediq Sediqqi, spokesman for Afghan President Asharf Ghani, tweeted yesterday. He defended the government, saying also that a joint government-media commission and a trust fund for journalists have been created in the past years.
Tuesday’s statement by the 30 media outlets said they were “deeply concerned about the deterioration in access to government-related information in Afghanistan,” and called on the international community and the government to protect the free flow of information.
The media groups said all Kabul government institutions have shortcomings when it comes to providing access to information but they singled out the Supreme Court, the Attorney General’s Office and the National Directorate of Security Directorate as the worst offenders. Also, the Ministry of Finance, the Central Bank and the Ministry of Defense were high on the same list.
The media protest took place in front of the Ministry of Information and Culture where the government had promised to build a monument to slain journalists three year ago. Work on the monument has yet to start.
U.S. Chargé d’Affaires Ross Wilson urged the Afghan government to “work with the press to make Afghan democracy stronger.”
“Information is a vital resource of any free and open society,” Wilson said.
During an attack in April 2018, nine journalists who rushed to the scene of an explosion in Kabul were killed by a second suicide bomber who waited . A tenth journalist was killed the same day, shot in eastern Khost province. RAHIM FAIEZ, KABUL, AP