Agriculture | No deals being done in US soybean sales 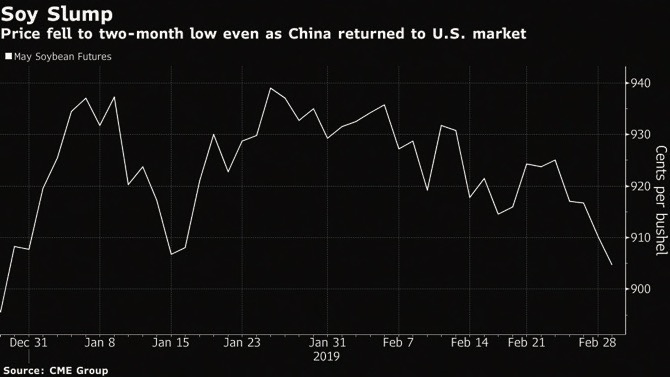 While Chinese buyers returned to the market Friday asking for offers, traders familiar with the process say no deals have been done. That’s a disappointment for American farmers looking to offload a bumper harvest that’s been piled in bags and silos due to President Donald Trump’s trade war with China.

“There’s certainly been a lot of chatter,” Arlan Suderman, chief commodities economist for INTL FCStone, said in a telephone interview. “We haven’t seen any evidence that exporters are lining up ocean freight to ship large quantities of agricultural commodities to China.”

Trump stepped up the pressure, asking China to remove tariffs on beef, pork and other U.S. farm products immediately. In making the demand, he cited his decision to refrain from increasing U.S. tariffs on Chinese goods.

Chinese buyers asked for offers of American soybeans for delivery between June and December, according to the traders, who asked not to be identified because the negotiations are private. The beans would be for shipment from ports in the Gulf and the Pacific Northwest, the traders said.

The world’s top soy importer has largely shunned U.S. supplies after slapping retaliatory tariffs of 25 percent on many American farm goods last year. After Trump and his Chinese counterpart Xi Jinping reached a truce in December, state buyers Cofco Corp. and Sinograin returned to the market to buy 10 million tons of soy.

While another batch of the same size is expected, traders remained skeptical of China’s intentions to buy following Friday’s inquiries. Soybean futures for May dropped as much as 1.1 percent on the Chicago Board of Trade to $9.005 a bushel, the lowest for the contract in two months. Prices then pared losses to trade little changed amid broader gains for grains and U.S. equities.

Traders also questioned whether the purchases would significantly help offload American stockpiles, forecast to climb to a record in the season ending Aug. 31. That’s because China’s inquiries Friday included a period that could mean shipments from the new crop. Perdue had said that the purchases would be for supplies from the harvest completed in the fall. Isis Almeida & Shruti Date Singh, Bloomberg