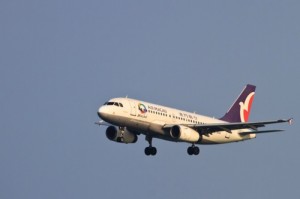 The executive director and chief executive officer of Air Macau, Zhu Song Yan, left the local aviation company at the end of August, according to a report by TDM.
Nevertheless, there has been no news on his successor.
Mr Zhu has already returned to the Beijing headquarters of Air China and assumed the position of adviser to the president and general manager of Air China’s department of planning and development. Air Macau said that it has to wait for the decision of its parent company China National Aviation Corporation before revealing the name of its new CEO and their arrival date. In the meantime, the chairman of Air Macau’s board of directors, Zheng Yan, will take Mr Zhu’s place.
On a separate note, a 34-year-old man was rushed to the Conde de São Januário Central Hospital (CHCSJ) from the Macau International Airport two days ago.
Information suggested that he lost consciousness while checking the oil tank of an aircraft. It is suspected that he inhaled poisonous gas.  He was in a serious condition and is still in the CHCSJ.