The Legislative Assembly (AL) debated several issues raised by lawmakers for the second consecutive day.  One of the topics that resulted in a lot of discussion related to a spoken enquiry presented by Ho Ion Sang.
The lawmaker questioned the government regarding the recent changes made to the licensing of retail sales of meat, fish, poultry and vegetables, which revoked the previous regulation banning the sale of these products within 500 meters of the markets.
At stake, according to the lawmaker, are issues regarding food safety as well as a lack of competition, which could lead to high retail prices.
Lei Wai Nong, vice chairman of the Civic and Municipal Affairs Bureau (IACM) replied to these comments by pointing out that all establishments need licensing. “When licensing, the IACM takes note all relevant aspects, such as hygiene, safety, the environment, and others,” he stressed, stating that there is no reason for outrage.
Regarding prices, the IACM official stated that Macau is “a free commerce territory.” 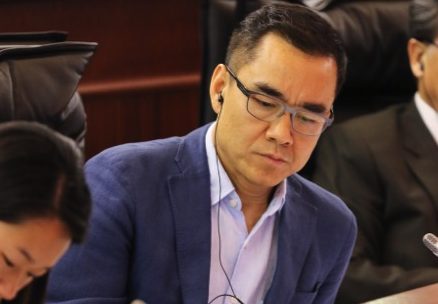 “There are no quotas for importing fresh goods. Prices are a result of supply and demand as well as conditions and operating costs,” he concluded.
The reply of Mr Lei did not seem to reassure the lawmakers, with Lau Veng Seng expressing concerns over the fact that most of Macau’s seafood products come from an area in Guangdong that has reportedly been contaminated by heavy metals and bacteria. The lawmaker questioned IACM on how they propose to prevent these bad products from reaching consumers, and how long it will take for inspections to produce results.
Pereira Coutinho urged the government to strengthen its inspection processes for imported foods due to reports of bad quality products that he found on social media platforms.
The vice president of the AL, Lam Heong Sang, also found incongruences in the regulations in this area, namely regarding the sale of poultry. “The regulation is contradictory. The liberalization [of the market] is not compatible with previous measures, for example rules specifying that poultry cannot remain in the marketplace overnight, and that the produce must be killed with regard to bird flu safety regulations,” he mentioned.
Lawmaker Au Kam San also intervened, stating, “I support this measure but I do have some doubts regarding the capacity of the IACM to inspect all these new retail shops.”

Macau Civil Servants Association (ATFPM) President Pereira Coutinho raised controversy, stating that “there are civil servants having their rights exploited, and their complaints are not being met with an answer.”
The lawmaker added that currently “there is a disenchantment among civil servants. Their complaints seem to have reached a dead end.” Coutinho further urged the government to put in place an “independent structure” to handle these complaints.
Kou Peng Kuan, Public Administration and Civil Service Bureau (SAFP) Director, replied on behalf of the government, saying: “To ease on the contradictions and conflicts involving complaints, the government is preparing the creation of a mechanism for handling complaints from civil servants.” The director added that complaints would be handled by a “specialized committee that will be responsible for monitoring the results of the response to the complaint.”
Lawmaker Ella Lei also addressed the issue, stating that, “to ask the civil servants to complain to their own colleagues makes no sense,” and could be a possible cause of reprisal.