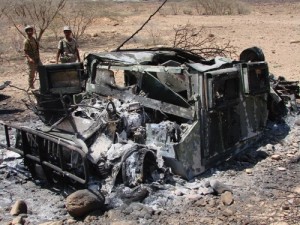 The al-Qaida offshoot that claimed to have masterminded the bloody rampage in France has been the most active of the terror network’s branches in trying to strike in the West.
Al-Qaida in the Arabian Peninsula said it directed the attack against the French satirical magazine Charlie Hebdo in Paris “as revenge for the honor” of Islam’s Prophet Muhammad.
The strike would be the Yemen-based branch’s first successful strike outside its home territory — and a triumph for its trademark double-strategy of waging jihad in Yemen to build its strength to strike abroad.
At least one of the two brothers involved in the attack on the weekly traveled to Yemen in 2011 and either received training from or fought alongside the group, authorities say. A U.S. intelligence assessment described to the Associated Press shows that 34-year-old Said Kouachi was trained in preparation to return home and carry out an attack.
Formed in 2009 as a merger between the terror group’s Yemeni and Saudi branches, AQAP has been blamed for a string of unsuccessful bomb plots against American targets.
These include a foiled plan to down a Detroit-bound airliner in 2009 using a new type of explosive hidden in the bomber’s underwear, and another attempt a year later to send mail bombs hidden in toner cartridges on planes bound to the U.S. from the Gulf.
The group’s lead bomb maker, Ibrahim al-Asiri, is believed to have created the explosives used in both foiled plots.
Bill Roggio, editor of the Long War Journal, which chronicles militant activities, said Yemen’s branch of al-Qaida has managed to seize territory inside Yemen, provide training and support for extremist groups operating in Syria, Iraq and other regions, and promote “lone wolf” attacks in the West. 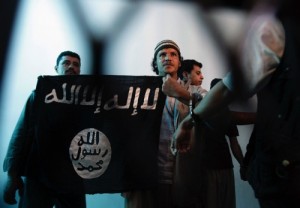 A suspected Yemeni al-Qaida militant, center, holds an Islamist banner as he stands behind bars during a court hearing in state security court in Sanaa

“They are active in the heart of the Middle East. They threaten the Yemeni government and they are directing their activities externally as well,” he said. “And they are serving to train and support in other theaters.”
The group’s leader, Nasser al-Wahishi, spent years as Osama bin Laden’s personal assistant before returning to his native Yemen. His close ties to bin Laden gave him influence within the group’s various branches and led to him assuming leadership of the core group after the al-Qaida leader’s death.
His focus on networking with other militant groups in Africa, Iraq and Syria gave the Yemen branch particular prominence in the network.
The group was the first to use English publications to reach out to supporters in the West, with the launch in 2010 of its English-language magazine, Inspire. It featured commentary by a radical U.S.-born cleric, Anwar al-Awlaki, who was killed in a U.S. drone strike in Yemen in 2011, but whose words are still influential in cyberspace.
The group has repeatedly threatened Charlie Hebdo and other cartoonists who have satirized the Prophet Muhammad. Charlie Hebdo editor Stephane Charbonnier, one of the 12 people slain in Wednesday’s attack on the magazine, was on a hit list published in a 2013 edition of Inspire. Associated Press, Cairo, AP