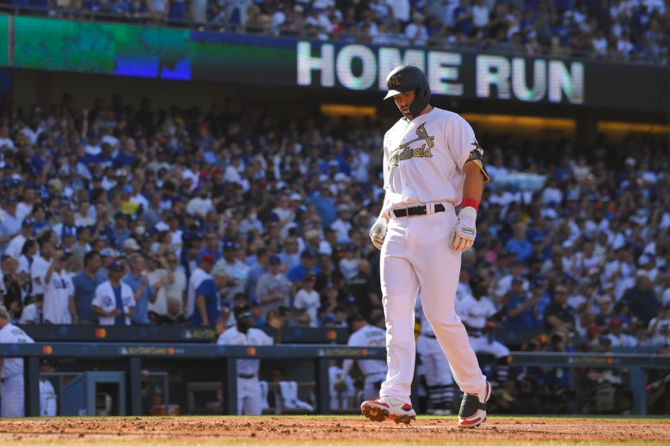 The National League didn’t have a hit between the first and eighth innings of Tuesday night’s 3-2 loss, its ninth in a row.

In a sport where R&D has become as important as BP, four of the five runs scored on long balls.

There were 22 strikeouts, including the final three batters on 10 pitches by Cleveland’s Emmanuel Clase in a game that lasted 3 hours, 11 minutes despite just 13 hits, five walks, two hit batters and one runner reaching on a error.

Twenty All-Stars threw 299 pitches, 105 of them fastballs. The slowest fastball was 90.2 mph on the second pitch of the game from 34-year-old left-hander Clayton Kershaw.

Forty-eight were 98 mph or higher, and Ryan Helsley of the St. Louis Cardinals was velocity king. The 28-year-old topped 100 mph on eight of 15 tosses, the fastest a 103 mph blazer that Minnesota’s Luis Arraez fouled off in the eighth.

“I went out there, showed what I had,” Helsley said. “It was a cool environment being in this game.”

Seattle’s Ty France, greeted by Dodger Stadium organist Dieter Ruehle with “La Vie en Rose” when he pinch hit for his All-Star debut, fouled off a Helsley fastball, then struck out when he chased a low outside slider.

“The way game is now, everybody’s throwing that hard. It’s not fun to face, but it’s just how the game is,” France said. “To be able to step in the box on this stage, it was pretty cool.”

“Every time that bullpen door swings open, it’s velocity,” NL manager Brian Snitker said. “The guys, they weren’t like that. The closers weren’t throwing like they are now. But it’s kind of the way they are growing up and now they are trained — and amazing to me, the number of them, too. It’s like they just keep coming.”

Defensive positioning designed by Joe Espada, Dusty Baker’s bench coach in Houston, led to outs on balls that used to be hits.

Juan Soto’s third-inning grounder was gloved by second baseman Andrés Giménez 20 feet into right field. Kyle Schwarber’s bouncer in the seventh was picked up in the center of the diamond by shortstop Corey Seager, who started to the right of second, and Jake Cronenworth’s hopper went directly to second baseman Santiago Espinal 10 feet into right field.

“The shift giveth and the shift taketh away,” Baker said. “But still, I think it giveth more than it takes away.”

The batter’s eye in center field offered a vivid display of what has overtaken baseball — an array of high-speed cameras and radar equipment that track every ball’s spin, every player’s sprint and stumble.