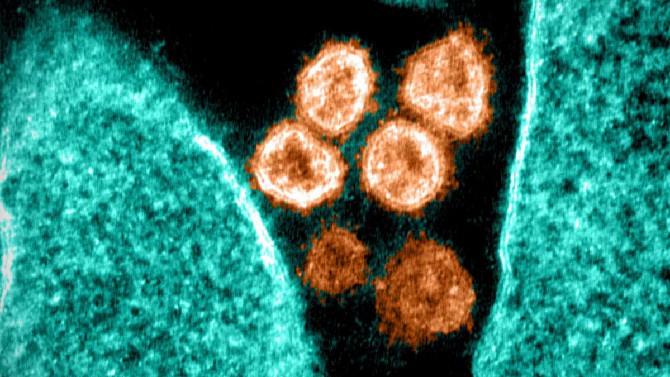 Determining the origins of COVID-19 should be driven by science and solid facts, but the “lab leak “hypothesis should not be the focus of the investigation and politicizing the search won’t help, experts said.
“I don’t see any features in the (COVID) virus genome that do not occur in other coronaviruses,” said Benjamin Neuman, chair of the Biological Sciences Department at Texas A&M University-Texarkana, in the United States.
He said some people have tried to use specific features of the SARS-
CoV-2 spike gene as evidence that it is an artificial virus, but all these features can also be found on other coronaviruses.
Neuman, a member of the international committee that named SARSCoV-2, the virus behind the COVID-19 pandemic, said the explanation that best fits the full set of data is that this new virus probably originated outside a laboratory in nature, like other known coronaviruses.
“I suppose it would be comforting, in a very human way, to be able to point to a person or an event that is responsible for all the misery of COVID-19, or any other virus for that matter,” said Neuman. “In stories, that sometimes happens, but not so much in nature.”
In addition to the differences in the virus that have been the focus of many conspiracy theories, Neuman said, SARS-CoV-2 has hundreds of other mutations scattered throughout its genome. “These other mutations are distributed in roughly the same way as we might find in any naturally occurring coronavirus,” he told China Daily.å
“Without a time machine and possibly a magic wand, I don’t know how a reinvestigation would be able to turn up anything different,” Neuman said.
China has submitted a proposal to the World Health Organization for the second phase of the COVID-19 origin study in an effort to support and coordinate with the organization in tracing the origins of the virus globally, Foreign Ministry spokesman Zhao Lijian said on Thursday.
A paper by 21 virologists, posted online in early June, reviewed the scientific evidence for the origin of the virus. It concluded that the virus’ origin is overwhelmingly likely to have been zoonotic, transferred from an animal source to human infections, and that there is zero evidence for a laboratory origin.
Lead author Edward Holmes, an evolutionary biologist and virologist at the University of Sydney, said careful and critical analysis of the available data provided no evidence that SARS-CoV-2 originated in a laboratory.
The paper said that focusing on a highly improbable lab origin distracts from the most urgent scientific tasks to “comprehensively investigate the zoonotic origin through collaborative and carefully coordinated studies”.
Though there is no strong evidence yet on the origin of COVID-19, there are many studies and publications on bat coronavirus related to SARS-CoV-2, said Alongkorn Amonsin, director of the Center of Excellence for Emerging and reemerging Infectious Diseases in Animals at Chulalongkorn University in Bangkok.
Alongkorn said that more research needs to be done on the pre-COVID exposure in animal, wildlife and human populations to discover the novel coronavirus’ origin.
Neuman, from Texas A&M, said it is very important to find the very close relatives of SARS-CoV-2.
“The closest that we have are a couple of bat viruses that are each around a thousand mutations different from SARS-CoV-2,” said Neuman, who added the differences could represent perhaps 50 to 100 years of evolutionary distance. “I think there are, somewhere in nature, more viruses similar to this,” he said.
The most important issue for dealing with the pandemic now is vaccination, because more variants have emerged, said Obli Rajendran Vinodh Kumar, senior scientist at the ICAR-Indian Veterinary Research Institute’s Division of Epidemiology.
China has repeatedly expressed opposition to attempts by some Western powers, particularly the United States, to politicize the virus origin probe by targeting a Wuhan research facility.
Beijing’s position has been endorsed by many nations, with dozens of them recently writing to the WHO to denounce attempts at politicization of the issue and distortion of facts. YANG HAN, Hong Kong, China Daily