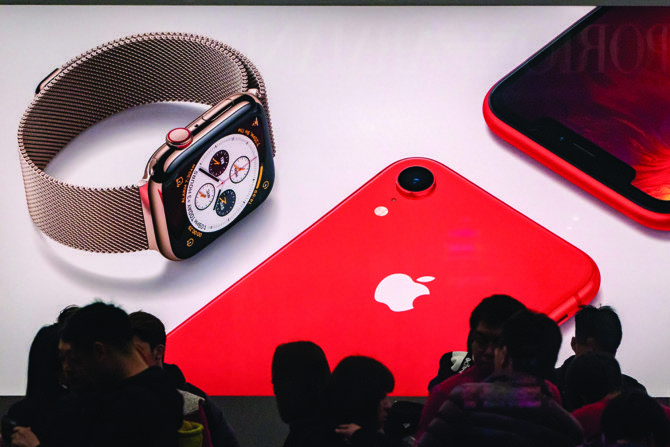 The trade war is taking its toll on Apple Inc., a new survey of Chinese consumer attitudes shows.

The company tumbled to No. 24 in an annual report on China’s top brands, falling from No. 11 a year ago. In 2017, before the trade war started, Apple was fifth in this ranking. Meanwhile, Apple’s biggest local rival, Huawei Technologies Co., climbed two spots and came in second, behind only Chinese payment service Alipay.

The shuffle in the rankings is a sign of the growing challenge American brands face in the second year of Donald Trump’s tariff showdown with his Chinese counterpart, Xi Jinping. The survey findings show Chinese consumers growing cooler towards some American brands, especially after smartphone giant Huawei saw its Chief Financial Officer, Meng Wanzhou, arrested in Canada last year at the behest of the U.S. government.

Trump followed with a ban on Huawei products, which helped fuel a surge of local support for the Shenzhen-based brand, according to Jay Milliken, senior partner in Hong Kong with Prophet, the San Francisco-based consultancy that conducted the survey of 13,500 Chinese consumers.

Prophet’s survey, conducted annually, this year asked Chinese consumers in large cities for their views on more than 250 brands across 27 categories. Respondents evaluated brands they used or were considering using, rating rated their relevance to the lives of consumers based on qualities such as innovation, usefulness and dependability.

“There’s a lot of nationalistic buying in that category, because Chinese consumers interpreted what happened to Huawei as an attack,” he said.

Named after its founder, the famous gymnast, Li Ning capitalized on the nationalistic sentiments of many Chinese consumers with the launch last year of a China Li-Ning collection at New York Fashion Week that heavily used red and yellow, China’s national colors.

There were only two American names in the top ten this year — Android at No. 3 and Intel at No. 9 — compared to five in the 2017 survey.

Unlike Apple, Android and Intel don’t have to worry about consumers switching allegiances to local competitors, Milliken said, and that explains why they manage to remain highly ranked.

“Some Western brands are so integral in the lives of Chinese consumers, they’re almost predisposed to not losing relevance,” he said. “There are no Chinese alternatives so those remain super relevant.”

Geopolitical tensions aren’t the only problem Apple faces in China, its biggest market after the U.S.

While Beijing is pushing to make the country a leader in the introduction of high-speed 5G networks, Apple’s phones — even the newly announced iPhone 11 — don’t support that latest wireless standard. Bruce Einhorn, Bloomberg