‘Arctic’ is a solid, and solitary, survival tale 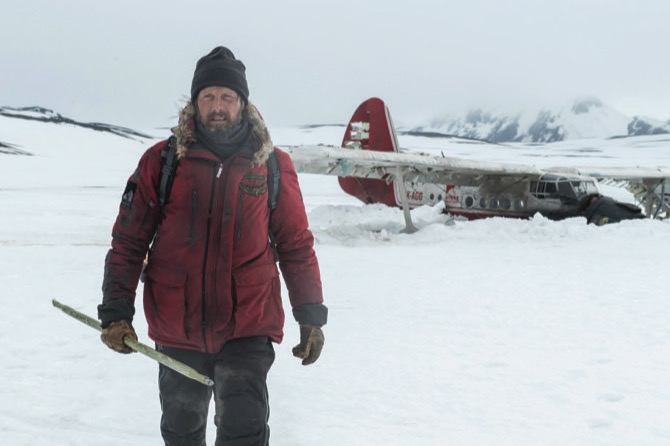 Mads Mikkelsen in a scene from “Arctic”

The premise for “Arctic” is so simple it’s almost silly to describe: Stranded man tries to survive. It’s also been done more than a few times in movies, so it’s understandable if hearing that invokes a yawn. And yet with barely any dialogue, traditional storytelling methods or even a cute pet or inanimate object to help, director Joe Penna and star Mads Mikkelsen have made a riveting and precisely plotted film worthy of other greats in the genre.

Instead of Mars or a desert island, Mikkelsen’s character, Overgard, has had the misfortune of crash-landing his plane in the arctic. We don’t see the crash, and we don’t know how long he’s been there when we first meet him fussing with snow and rocks with purpose. But a wide-shot reveals what he’s working on: A massive SOS. Ok, you think, he’s been here for a bit already. And he has a methodical, if uncomfortable-looking, little system in place to occupy his chilly days.

He’s dug out holes in the ice for fishing, stores the freshly caught fish in a cooler and takes one of the older ones for his meal, carving out little slices of frozen sashimi to eat with a knife. His days are mostly spent exploring, making notes on a little map and searching for signals with a device that’s never really explained. When the sun starts to fade it’s time to retire to the wrecked plane, where he removes his gloves and socks (what toes and fingers are left have been ravaged by frostbite) and gets ready for sleep, zipping himself up in a sleeping bag cocoon. A beeping alarm on his watch wakes him in the morning. The alarm is a lifeline, and goes off multiple times during the day, possibly to remind him to move on to the next task, or maybe as insurance to remind him to wake up should he drift off in an unprotected spot. Sure, it’s slightly monotonous, but he does seem to have a goal he’s working toward and he isn’t even close to giving up.

Then one day he sees a helicopter and the people inside seem to see him. I won’t spoil what comes next completely, but it is far from the end of his story and adds an interesting element to Overgard’s journey. But it’s the kind of film that might make you want to sign up for a wilderness survival class as soon as you walk out.

It’s pretty amazing just how compelling this is for being so simple, but it allows the viewer to really get wrapped up in the minutiae of it all: The performance, the landscape, the minor triumphs and major setbacks. When he discovers a tiny little lighter to heat a burner that allows him to actually eat cooked fish for the first time in forever, you can’t help but smile with satisfaction along with him. You’ll get a pit in your stomach when something doesn’t pan out and you’ll inspired by his motivation in the face of everything. Mikkelsen is an empathetic presence, no matter how many villains he has to play. Penna, who has a background in shorts and music videos, is a strong visual storyteller and it’ll be interesting to see what he does next.

Just don’t confuse “Arctic” with “Polar,” the other early 2019 Mads Mikkelsen movie. But you’ll probably figure it out pretty quickly if you do — there are no assassins or Vanessa Hudgens-es in “Arctic.”

“Arctic,” a Bleecker Street release, is rated PG-13 by the Motion Picture Association of America for “for language and some bloody images.” Running time: 98 minutes.