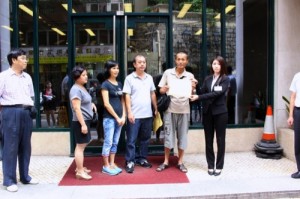 Several Areia Preta residents yesterday handed invitations at the government headquarters and asked three public departments to hold talks with them, as well as attend a consultation session about the Light Rapid Transit (LRT) Northern segment that will be organised.
The residents claimed to live near one of the proposed LRT Northern segment routes that passes through the Areia Preta Urban Park.
In the invitations, the residents have asked to meet officials from the Land, Public Works and Transport Bureau and the Fire Services Bureau on September 24 and 25 respectively. They want to discuss their concerns about an LRT associated project that will see the construction of an underground parking lot at the Rua Central da Areia Preta, as well as the possible impact of the proposed LRT route on their daily lives.
They also asked the Transportation Infrastructure Office to attend a consultation session on September 27 to listen to residents’ opinions and concerns.
Sam Sei Mui, who lives in block 2 of Edificio Jardim Kong Fok Cheong, represented the residents yesterday.
He said that while there were public consultations organized by the government over the LRT route, many of the people who attended or spoke at the sessions were not the ones who would be affected by the project.
“Therefore, we handed this letter to the Office of the Chief Executive and hoped that the authorities can hold a formal consultation session that is truly for those living within 300 meters radius of the LRT route. This session should [allow us] to voice our opinions,” he said.
The representative has accused the GIT of avoiding questions and giving perfunctory responses. He also claimed that during the consultation sessions organized by the authorities, the residents who would be affected by the LRT project were not given enough time to voice their concerns. As a result, they decided to organize their own consultation session so that residents could have sufficient time to express their opinions.
Some Areia Preta residents have been disgruntled with the government over one of the LRT Northern segment proposals that will see the construction of the LRT viaduct track on the Areia Preta Urban Park.
They are also concerned with the construction occurring on the underground parking lot on Rua Central da Areia Preta, due to the fear that the digging would affect the structural integrity of residential buildings nearby.
Sam Sei Mui claimed that they would not oppose the construction of the underground car park as long as the government could guarantee that it would not cause any damage to their buildings. He also wanted the government to provide financial compensation if any adverse effect of the digging does occur.
“It is very simple for us. [If] the government said the digging can take place, we will allow them. We have never said no to that. The crux is that the government has to promise compensation if any problem arises. It’s that simple,” he said.
“But now the situation is: the government only [wants to] go ahead and dig but refuses to give us any promise. Then we for sure would oppose [the project],” he said.
The representative refused to discuss the issue of whether or not there is a need for a parking lot at that area and claimed that it is an issue for the authorities to consider. He reiterated that as long as the government can promise to provide compensation, he would not care if the government “dug through the crust of the earth”.
Sam Sei Mui said that the residents have yet to discuss their next action or how they would proceed if the officials refuse to meet with them.