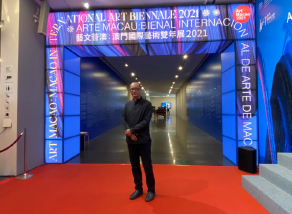 The exotic nature of the foreign artworks presented in the Art Macao: Macao International Art Biennale 2021 (Art Macao 2021) — or their “strangeness” in contrast to local culture — will stimulate Macau residents and the whole city, encouraging them to think differently and be more innovative, according to the art event’s chief curator Qiu Zhijie.
Prior to the official kick-off ceremony of the four-month mega art event, Qiu, one of the most influential and awarded contemporary artists in China, shared his insights yesterday with the media about the impact of Art Macao 2021 on Macau’s community.
Qiu is also the dean of the School of Experimental Art at the Central Academy of Fine Arts, with an extraordinary talent for contemporary visual arts.
“The development of a city cannot [flourish] without the nutrients of art. The strangeness within art pieces created by foreign artists is the crucial element [in this event] to help the city innovate,” Qiu said.
The biennial art event has been deemed one of the most important in Macau’s calendar. The event, featuring Macanese, Chinese and international artworks galore, is a cultural melting pot that stimulates thoughts and emotions.
The biennale itself is also an epitome of globalization, said artist-cum-curator Qiu, who was born in Fujian in 1969.
“The event is also a highly prized one, as it is rare that art pieces of Chinese and international artists can be brought together and presented in the same event,” Qiu said. This is particularly true at a time when international travel has come to a virtual halt due to the Covid-19 pandemic.
Art, with its intrinsic perspective, is a form of communication. “Though distancing from each other [during the pandemic], we can still communicate and understand one another through the bridge of art,” he told the guests.
To boost the engagement of locals in the art event, Qiu suggested the organizers conduct surveys and gather local opinions including ideas and thoughts on featured art pieces. He proposed that the government invite residents to jointly create some art pieces, usually described as “community art,” to encourage more interaction and dialogue during the event.

Globalized Main
Exhibition
Under Qiu’s curation, the Main Exhibition at the Macao Museum of Art — under the theme of the “Advance and Retreat of Globalization” — has been divided into three sub-exhibition zones that beckon audiences to embark on a thought-provoking, artistic journey.
The three areas house over 100 pieces or sets of artwork, made by over 40 artists from nearly 20 countries and regions.
The first thematic zone, named “The Dream of Mazu,” will chiefly showcase ceramics created by global artists, supplemented by artworks of glass, leather carvings, recordings and ink paintings, the curator said.
The second zone, “Matteo Ricci’s Labyrinth of Memory,” shows “the encounter and convergence of Eastern and Western cultures,” he added.
The third and final area, the “Advance and Retreat of Globalization,” recapitulates the first two zones from the angles of space and time. “It reveals the thoughts of artists from all over the world in the era of globalization, especially during the pandemic.”

Macau in Qiu’s eyes
When talking about the city’s qualities, the veteran of the art industry stacked Macau against its neighboring city Hong Kong.
“Macau is a laid-back place when compared to Hong Kong. It is this relaxed environment that renders the locals calmer and more tolerant,” he said.
The city has a vivid quality, accentuated by its mix of Chinese and Portuguese cultures, which make Macau an ideal city to host the biennial art event, he concluded.