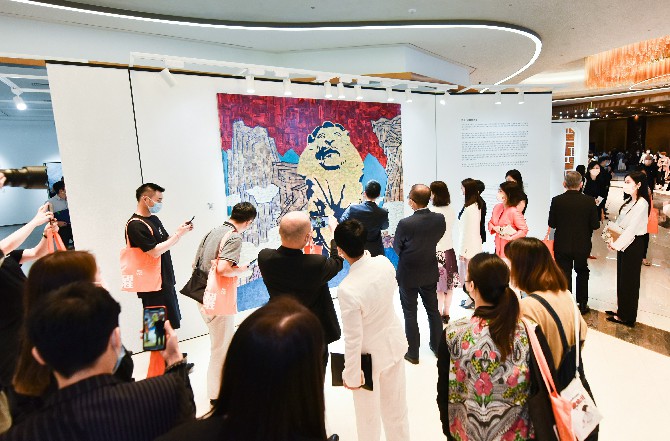 MGM has brought together artists from China in a thematic art exhibition titled “Awakening” — a kaleidoscopic art journey through a cornucopia of Chinese contemporary art — to highlight the riches of Chinese culture and call for “renewed faith, vitality and cultural enlightenment” in audiences during the pandemic.
The Awakening exhibition, in celebration of The Art Macao: Macao International Art Biennale 2021 (Art Macao 2021), kicked off at MGM Cotai on July 16.
The project is curated by Calvin Hui, a renowned gallerist in Hong Kong and an expert in contemporary Chinese art. Hui, also the co-founder of London and Hong Kong-based 3812 Gallery, is a long-
time partner of MGM’s with art projects.
The exhibition features modern artworks created by famed Chinese artists. The entire collection was inspired by MGM’s “lion” brand image, with respect to the creature’s intrinsic nature and symbolism in Lingnan culture.
A large-scale public art installation named “MGM Lion Party,” perched at the Spectacle in the resort, was created by acclaimed Chinese sculptor Hung Yi. The installation is designed to raise public consciousness in harmonious coexistence with nature, rejuvenating audiences with its 14 animal sculptures adorned in bold and dynamic color tones. Vivid traces of traditional culture, stories and totems can be found on every sculpture.
Another signature piece, “Awakening Lion,” will draw viewers in with its bold lion image comprising a visual collage of China’s cities. The work was conceived by Xue Song, a veteran college and contemporary pop artist.
Well-known Chinese artist Liu Guofu has created an oil painting masterpiece named “Awakening,” featuring a subtle lion’s body outline in blue hues, which is sure to entice art connoisseurs.
The exhibition is part of MGM’s endeavors to foster the development of the “tourism and culture” sectors, in alignment with the nation’s policy to shape Macau into an exchange and cooperation base with Chinese culture as its mainstream and the co-existence of different cultures, according to Pansy Ho, co-chairperson and executive director of MGM.
“We will carry on and innovate in traditional culture, spreading its unique allure and injecting vitality into the cultural arts, making Macau a cultural tourism destination,” Ho pledged in a videorecorded speech.
The exhibition, which is open now until October 31, is the inaugural event in the “MGM Lion IP Program,” the group’s long-term project aiming to showcase diverse artistic tourist offerings across multiple genres.
The opening ceremony was officiated by key officials and other guests, including director of the Macao Government Tourism Office Maria Helena de Senna Fernandes and Director of the Cultural Affairs Bureau Mok Ian Ian.
Before the opening ceremony, MGM mounted the “Greater Bay Area Contemporary Art Symposium – Contemporary Dialogues of the Chinese Culture Awakening,” at MGM Theater — with Calvin Hui, Xue Song, Liu Guofu and Wang Huangsheng, Chief Director of the Art Museum at Guangzhou Academy of Fine Arts, as guest speakers.
The art experts explored the intersections of Chinese arts and culture, and the prospects of the art industry in the Greater Bay Area. They called on young artists in the region to stick to and thrive on their originality.