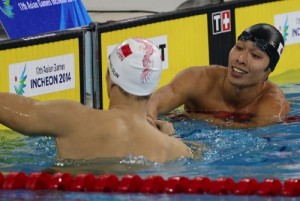 The Asian Games saw its first major upset yesterday as Japan’s Kosuke Hagino stole the thunder from one of swimming’s biggest rivalries by winning the 200-meter freestyle final ahead of China’s Olympic champion Sun Yang and South Korean star Park Tae-hwan.
Weightlifting records also continued to fall at the Asiad in the South Korean port city of Incheon. North Korea’s Kim Un Guk broke two world records, while two new women’s world records were set by Taiwan’s Hsu Shu Ching and Kazakhstan’s Zulfiya Chinshanlo.
Overall, South Korea remained top of the medal tally, with 12 golds, 10 silvers and 9 bronzes. China was just behind with 12 golds, 9 silvers and 11 bronzes, followed by Japan with seven golds, eight silvers and 10 bronzes.
After finishing second fastest in the heats, Hagino won gold in 1:45.23, just ahead of Yang in 1:45.28 and Park in 1:45.85. Just minutes later Hagino raced again to take bronze in the 100 backstroke.
The 20-year-old swimmer said his focus had merely been on giving Sun and Park some competition and improving his personal best. “I myself had thought before the race that this would be a race between two giant rivals. I didn’t expect to win,” Hagino said. “I was surprised to win.”
The win continues an excellent run of form that saw him beat Michael Phelps in the 200 medley at last month’s Pan Pacific Championships in Australia, where he also won the 400 IM. Hagino will be competing in a total of six events at the Asian Games. The race was the first of three showdowns between Sun and Park at the Asiad.
Though Sun had vowed to dominate Park, the two are about as evenly matched as two swimmers can be. Park won the 200 at the last two Asian Games, part of a total haul of six Asiad golds, and holds the Asian Games record of 1:44.80. While the pair tied for silver in the 200 at the London Olympics two years ago — the last time the two raced — Sun holds the Asian record of 1:44.47 and won the event at last year’s World Championships, a meet that Park skipped.
The two are also due to meet in the 400-, and 1,500-meter freestyle events.
In other races, Japan’s Irie Ryosuke took gold in the men’s 100 meter backstroke with a time of 52.34, followed by China’s rising star Xu Jiayu in 52.81 and Hagino in 53.71 in his second appearance of the night.
Kim, claiming North Korea’s second gold medal of the games, lifted 154 kilograms in the snatch to set his first record of the day in the men’s 62-kilogram class. The 2012 Olympic champion went on to lift a combined total of 332 kilograms for another world best, beating his own previous mark by five kilograms.
Competing in the 53-kilogram class, Hsu set the new women’s record and took the gold with a combined total lift of 233 kilograms, two kilograms more than the old mark.
Also in the 53-kilogram class, Chinshanlo improved the world record in the clean and jerk by one kilogram with a 132-kilogram lift.
On Saturday, North Korea’s Om Yun Chol beat his own world record in the clean and jerk by one kilogram, lifting 170 kilograms in the men’s 56-kilogram class.
A total of 15 gold medals are on offer at the Asiad.
Separately, India was slapped with a USD10,000 fine for its late withdrawal of athletes from the games. Indian Olympic Association joint secretary Rakesh Gupta said the fine was announced by the Olympic Council of Asia but the national body has protested since “it could not oppose a government decision” to reduce the contingent. The IOA had recommended 662 athletes and 280 officials in a total of 942, but the government cut the list to 516 athletes and 163 support staff for an overall 679, saying only those with a realistic chance of winning medals should participate. Christopher Bodeen, Incheon, AP