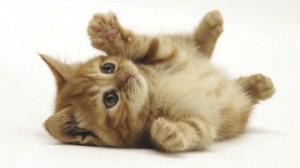 In the last few weeks I have been asked several times how do you determine the age of puppies and kittens. I decided to start with kittens as they are the most difficult. Kitten age can be difficult to determine if a kitten is found after birth, but is important to know so that the kitten can receive the proper amount of care. A vet or animal care expert may be the most accurate resource to turn to when trying to determine the age of a kitten, but there are a few steps that a cat owner can take to try and guess a kitten’s age.

Look for the Umbilical Cord
The smallest kittens will still have their umbilical cords attached. Kitten age on a kitten with an umbilical cord is as young as zero to three days. Its essential that the kitten receive round the clock care at this age if it has been separated from its mother, preferably now with a foster mother cat. You can also try some kitten milk formula, but I like to keep them on the mother.

Check on the Status of the Eyes and Ears
Kitten age can also be determined by looking at the kittens eyes and ears. Kittens will begin partially opening their eyes at about one week to ten days old. Their eyes will completely open and their ears will begin to open at between two to three weeks of age. Kittens typically have blue eyes for the first two weeks of their life and the eyes change color afterwards. However, like my cats, particularly all white cats and Siamese cats, do retain their blue eye color.

Watch its Level of Activity
Kittens do not even begin to stand until they are between two and three weeks of age. They begin to become more explorative at around four weeks of age, but they may still stumble a lot. At around five weeks, kittens tend to stumble less often. Kitten age can be difficult to determine via level of activity after six weeks, as the kittens will become extremely playful and active afterward and this extra energy can last for between eight months to a year, when the kitten becomes an adult cat.

Check its Teeth
A kitten will have all its baby teeth at around eight weeks of age. This means that it will have incisors, canines, bicuspids and molars. Kitten owners who see no or less than a full mouth of teeth can guess its age with the following in mind:

Estimate its Size
Kittens grow quickly. At the kitten age of between three and four months old, they are already about half the size of an adult cat. Kittens who are even smaller are younger than that. At one year, the kitten is considered an adult and may be fully grown, although it is possible to grow a bit bigger over the next year.