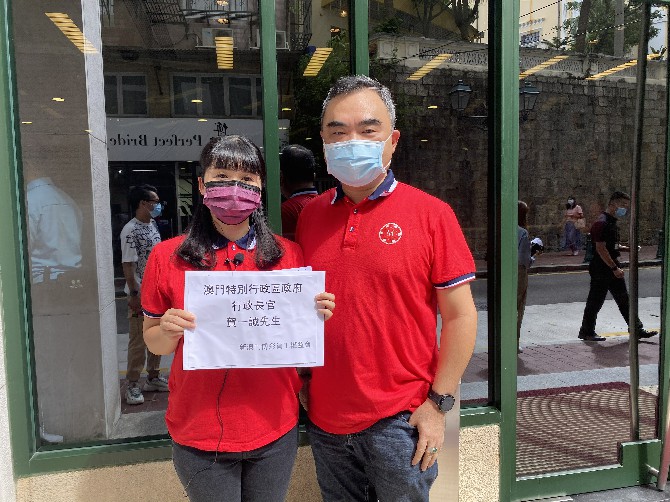 Representatives of the New Macau Gaming Staff Rights Association delivered a petition letter to Chief Executive Ho Iat Seng yesterday, calling on him to moderate stringent cross-border regulations and address the unconfirmed case in which a casino operator forced its staff to get vaccinated.
When addressing the media yesterday, the president of the association Cloee Chao said that the shortened validity period for the negative Covid-19 test (reduced from seven days to two days since June 8 due to a fresh coronavirus outbreak in Guangdong Province) has been a financial burden for most cross-border employees and their households.
As such, she suggested that the government relax the measure and return to the previous policy, namely, to recognize the validity of results for seven days, particularly for fully vaccinated individuals.
This will not only take the edge off the additional financial pressure, but it might also motivate people to be vaccinated voluntarily, she added.
“The new measure means that they have to undertake Covid-19 testing every two days. We gauged that it is going to cost each cross-border staff [member] around MOP1,000 monthly, just for conducting the test,” Chao told the Times earlier.
Call to safeguard
female casino workers
The association also took the opportunity to raise awareness of the alleged case in which a casino operator inappropriately coerced some of its employees to be inoculated.
It is alleged that even the pregnant and breastfeeding female workers were asked to submit medical proof just to get an exemption from vaccination. In another alleged incident, the same operator even urged the breastfeeding females to stop breastfeeding to take the vaccine as early as possible, she added.
On July 7, local news reports claimed that Melco Resorts & Entertainment Ltd (Melco) was the operator concerned. However, the director of Melco refuted these accusations, speaking to the media on June 6 at the sidelines of an event.
Despite the rebuttal, Chao urges the authorities to step in to address the issue.
She claimed that the association has no objection to operators implementing incentive policies to encourage staff to be vaccinated to help build herd immunity.
However, she hopes the government can do more to safeguard the rights of female casino workers.