Australia | Gladys Liu under fire over past links 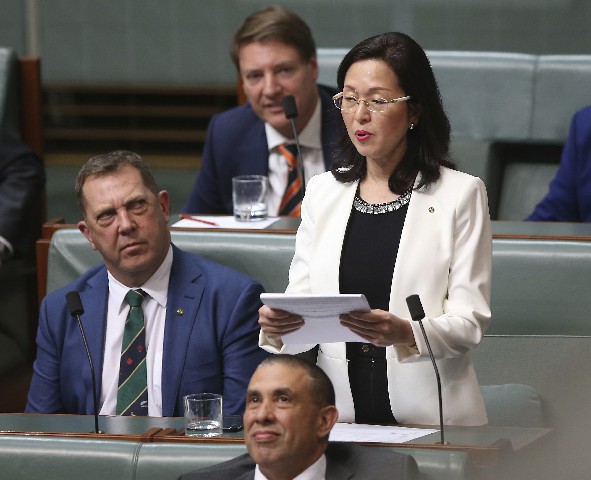 Gladys Liu, the first Chinese-born lawmaker to be elected to Australia’s Parliament

The first Chinese-born lawmaker to be elected to Australia’s Parliament has come under attack over her links to a Chinese foreign influence network.
Gladys Liu, who was born in Hong Kong in 1964, was elected to the conservative government in May elections to represent a Melbourne electoral division with a large population of ethnic Chinese voters.
She has come under media scrutiny recently over her membership in organizations overseen by the United Front Work Department of the Chinese Communist Party Central Committee, which exert influence on important individuals, organizations and governments outside China. Concern is growing about China’s influence in Australia, which last year banned covert foreign interference in domestic politics.
Australian Broadcasting Corp. reported Tuesday that Chinese government records indicate that Liu, who migrated to Australia in 1985, was a member of two provincial councils of the China Overseas Exchange Association between 2003 and 2015.
That association reported to the State Council, China’s chief administrative authority, when Liu was a member, but has since merged with the United Front Work Department.
She told Sky News television later Tuesday that she “cannot recall” being a member of those provincial councils.
“If I can’t recall, I cannot be an active member of that council, can I?” she told Sky News. “I can tell you that I have never been a member of this council.”
But in a statement yesterday, Liu said she held an “honorary role” in the council she had referred to — Guangdong Overseas Exchange Association — in 2011. But she said she no longer had any association with that organization.
“Unfortunately, some Chinese associations appoint people to honorary positions without their knowledge or permission. I do not wish my name to be used in any of these associations and I ask them to stop using my name,” she said.
Opposition lawmakers yesterday accused Liu of making misleading statements about her past links to “Chinese Communist Party propaganda arms.”
She has also come under fire for failing to condemn China’s military grab for contested territory in the South China Sea.
Asked in the Sky News interview if she agreed that China’s efforts to take over most of the South China Sea were unlawful, she replied, “I definitely put Australia’s interests first.”
She said yesterday that during the interview “I was not clear and should have chosen my words better.”
“We do not take sides on competing territorial claims but we call on all claimants to resolve disputes peacefully and in accordance with international law,” she said of Australia’s policy on the South China Sea.
Damien Kingsbury, a Deakin University expert on international politics, said the controversy surrounding Liu raised national security concerns.
“She’s certainly seen to have a link to an organization that is associated with intelligence-gathering operations and that would have to be very worrying,” Kingsbury said.
The opposition has likened Liu’s situation to that of Sam Dastyari, who resigned as an opposition senator in 2017 over his links to wealthy Chinese political donor Huang Xiangmo.
Huang made headlines when it was revealed that his company had paid Dastyari’s personal legal bills and then appeared alongside the then-senator at a news conference for Chinese media where Dastyari supported Beijing’s stance on the South China Sea, contradicting Australia’s bipartisan policy.
Australia has since canceled Huang’s permanent residency and banned foreign political donations.
Prime Minister Scott Morrison stood by Liu and rejected comparisons with the disgraced former senator, whom Morrison accused in 2017 of “betraying his country.” ROD McGUIRK, CANBERRA, AP