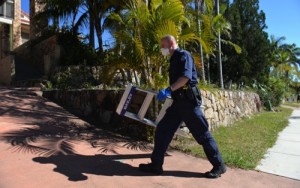 The Australian government has bent to public pressure by proposing a specific prohibition on secret service officers torturing suspected terrorists.
The government had planned to indemnify Australian Security Intelligence Organization officers against all criminal offenses committed in the course of their undercover work except for homicide, causing serious injury, sexual assault and serious damage to property.
Attorney General George Brandis announced yesterday that torture would be added to that list, after the opposition and other critics complained that ASIO officers should not be protected from legal liability for torturing suspects.
Because torture was against Australian law, no operation involving torture could ever be authorized, Brandis said.
“I’ve decided to add an explicit prohibition in relation to torture in so far as concerns special intelligence operations,” Brandis told reporters.
“I want to stress there is absolutely no necessary legal reason to do this. I am doing so because it is something that ASIO is perfectly happy to have expressed on the face of the legislation and so as to avoid this debate being diverted by an issue that is nothing but a red herring.”
ASIO’s Secretary General Duncan Lewis, who took over Australia’s top domestic spy agency last week, said torture was contrary to Australia’s international obligations.
“The Australian Security Intelligence Organization has never practiced torture, it does not practice torture and it never will,” Lewis said. “And for that reason, I’m perfectly happy that this addition is placed into the proposed legislation.”
George Williams, a University of New South Wales legal expert, said the amendment to specifically prohibit torture was necessary to prevent intelligence officers from being able to torture with impunity. The amendment legislation will be introduced to Parliament tomorrow.
Williams, whose university has been studying Australian counterterrorism laws for several years, said some of the laws went too far.
He said the United States and Britain both had a higher terrorism threats than Australia, but neither country had the equivalent of Australia’s preventative detention orders. Under such orders, suspected terrorists can be held for up to 14 days without charge. The suspects aren’t allowed to disclose their whereabouts, even to family.
The orders, which were introduced in 2005, were used for the first time last week when police arrested 16 people during counterterrorism raids in Sydney. One man was charged with conspiring with an Islamic State movement leader in Syria to kidnap and behead a randomly selected person in Sydney. He remains in custody. Another three men were held under preventative detention orders, but have since been released.
A sunset clause means the legislation that created the orders will expire in December 2015.
The government had planned to make that legislation permanent. But Brandis said that after consultation with Muslim leaders, he had decided to include another 10-year sunset clause that will extend the legislation to 2025.
Australia raised its terror warning to the second-highest level two weeks ago in response to the domestic threat posed by supporters of the Islamic State group. Rod McGuirk, Canberra, AP