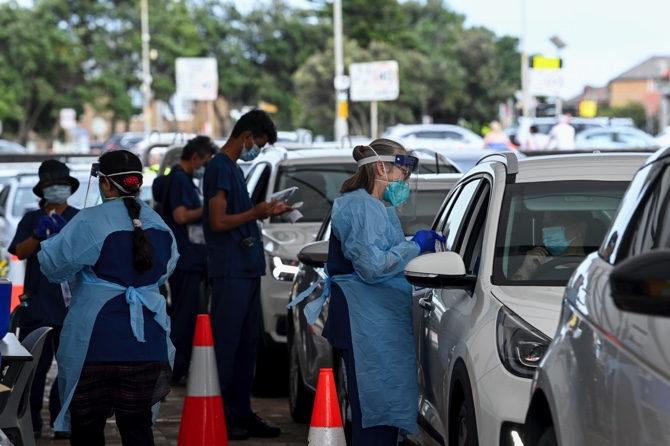 Victoria reported 8,577 new cases, a record for the state which eclipsed the previous peak of 7,442 on New Year’s Day.

New South Wales, Australia’s most populous state, saw a slight decline in case numbers from a record 22,577 on Saturday to 20,794 yesterday. But the number of people in hospitals rose to 1,204 from 1,066 the day before. There were 95 people in intensive care, a rise of 12 on the previous day.

Speaking with the Seven Network, Prime Minister Morrison said Australia’s health system is well equipped to deal with the surge in case numbers caused by the spread of the omicron variant.

“It’s important that with the rising case numbers, we see that the severeness of this illness is already being shown to be around 75 percent less than what we saw with delta,” Morrison said. “Rising case numbers is part of the omicron period, it’s part of the new phase of the pandemic we’re in.”

“That doesn’t mean to say it can’t put pressure on the hospital system. It can and that’s why we’re working very closely with the (state) premiers and chief ministers to make sure those resources are there,” Morrison added.

Morrison said the federal government would take steps to ensure hospitals had the resources they need to cope with rising admissions. His government last week changed the definition of “close contact” to ensure health workers who might have been exposed to an active case do not have to isolate and can return to work.

“We’re looking to make further changes on that this week to get more staff back into our hospitals and deal with the need,” Morrison told 9 News. MDT/AP