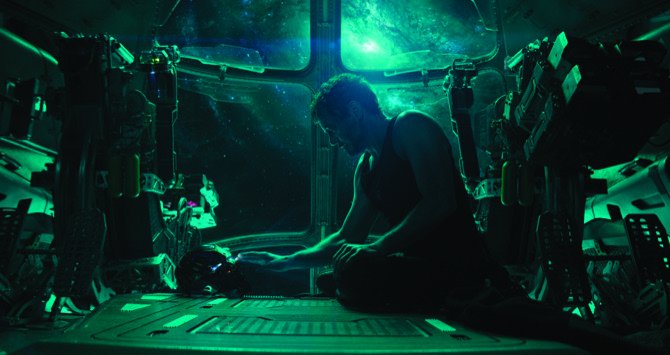 Robert Downey Jr. in a scene from “Avengers: Endgame”

Satisfaction is a complicated concept in Marvel Land. On the one hand, every morsel of pre-release information is obsessively poured over in feverish anticipation. But by the time the movie is coming out, a sudden hush comes over die-hard fans who, to avoid spoilers, have abandoned their phones, detached from the grid and found a quiet ditch to lay in until the coast is clear and the multiplex is open. It’s an anguished dance between wanting to know everything and nothing, at once. And it never ceases. No Marvel ending (usually) lasts past the credits.

Those fans won’t read this review, but “Avengers: Endgame” will, I suspect, offer them gratification and maybe a welcome moment of respite. “Endgame” not only answers the cliffhanger of its predecessor — that puny $300 million 156-minute “appetizer” better known as  “Infinity War” — but ties together the entire 22-film arc of the Marvel “cinematic universe,” begun with 2008’s “Iron Man.”

Generous in humor, spirit and sentimentality, Anthony and Joe Russo’s “Endgame” is a surprisingly full feast of blockbuster-making that, through some time-traveling magic, looks back nostalgically at Marvel’s decade of world domination. This is the Marvel machine working at high gear, in full control of its myth- making powers and uncovering more emotion in its fictional cosmos than ever before.

It was Robert Downey Jr.’s Tony Stark (Iron Man) who kicked things off for the MCU, and it’s him who opens “Endgame” and most often takes center stage. Providing even the most basic of plot points in “Endgame” is a fool’s errand, but it’s fair to say that it takes place some time after the rapture caused by the megalomaniac boulder Thanos (Josh Brolin). Having obtained all six of the “infinity stones,” he wiped away 50 percent of Earth’s creatures (and superheroes) at the end of “Infinity War” with the snap of his fingers.

Rather than bask in the extra parking spaces and uncrowded check-out aisles, the survivors have spent the ensuing time in a prolonged state of mourning. The remaining superheroes are also reeling, ashamed of their defeat. One has turned angry and vengeful, another has grown a beer belly. As nauseating as the aura of momentousness around “Endgame” has been for some, the movie — while certainly not lacking in ominous solemnity — is frequently funny, as the Russos, working from a script by Christopher Markus and Stephen McFeely, arrange their heroes in fresh pairings and unlikely contexts.

That’s owed sizably to the cast, which sports a number of top-tier comic actors, chief among them Downey Jr., but there’s also the thankfully prominent Paul Rudd (Ant-Man) and Avengers regulars Chris Hemsworth (Thor) and Mark Ruffalo (the Hulk). While Marvel has improved in gender parity (Brie Larson’s recently launched Captain Marvel plays a small but pivotal role here) its cosmos could still use some funny actresses. Can Maya Rudolph, please, be made queen of the galaxy?

But it is at least three clown cars worth of superheroes. Seldom, if ever, have more movie stars been brought together in one place; a film with this kind of collection of talent really can’t help but be decent, at minimum. Among them: Chris Evans’ Captain America, Scarlett Johansson’s Black Widow, Don Cheadle’s War Machine, Bradley Cooper’s Rocket. Yet the Russos, aided by the film’s ample running time, balance the characters and story lines swiftly and seamlessly.

Somewhere in this juggling act is a little bit of every tone in the Marvel universe: some of the wit of “Iron Man,” a touch of the madcap romp of “The Guardians of the Galaxy,” a smidge of the cosmic saga of “Thor,” and even a little of the resonance of “Black Panther.” More than any of those franchises, “Endgame,” at its best moments, carries the thrill of classic comic-book twists and reversals.

But the main difference is that a dose of finality has finally crept in to a universe where death is seldom visited on anyone but the bad guys. “Endgame” will likely be most remembered for its teary goodbyes. To say who would, of course, invite my own demise. But the send-offs, tender and sincere, capture something about the “Avengers” films. At their root, they are about family. Never has that been more apparent than in the daughters, fathers, sons, mothers, sisters, brothers and spouses that populate “Endgame,” making up the connections that bind this fantasy realm — one that, for all its turmoil, is far more unified than ours.

At their best, they are grand, mega-sized Hollywood spectacles. It’s not a spoiler to say that “Endgame” verges more on the latter. At least I don’t think so. Jake Coyle, AP Film Writer

“Avengers: Endgame,” a Walt Disney Co. release, is rated PG-13 by the Motion Picture Association of America for sequences of sci-fi violence and action, and some language. Running time: 181 minutes.