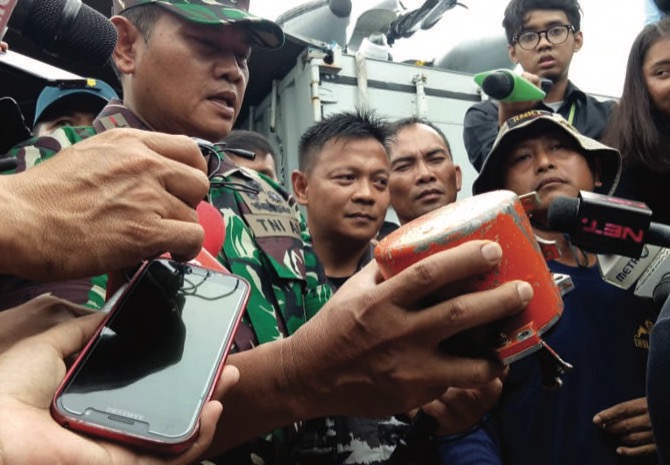 The chairman of Indonesia’s transportation safety agency confirmed yesterday that a third pilot was in the cockpit of a Lion Air Boeing 737 Max 8 on a troubled flight the day before the aircraft crashed on Oct. 29, just minutes after takeoff.

He suggested the reports fabricated details from the recordings.

The third pilot, who has not been identified, was qualified to fly Max 8s and was deadheading aboard the Oct. 28 flight from Bali’s Denpasar airport to Jakarta. The aircraft encountered the same problems that appear to have caused it to crash a day later. Some reports, citing unnamed sources, said the extra pilot had some experience with the problem and advised the two in charge of the flight on how to stop the plane from automatically pointing its nose downward, in line with Boeing’s operating instructions.

It remains unclear if the pilots fully shared their difficulties handling the plane with safety regulators, the airline or the pilots who perished in the Oct. 29 flight.

Tjahjono said the NTSC interviewed the pilot but legally cannot publish its findings.

Indonesian investigators say they are still analyzing conversations from the Oct. 29 flight recorded by the cockpit voice recorder that was only recovered from the sea bed in January.

Interest in the investigation into the crash off Indonesia’s coast, which killed all 189 people aboard, has intensified following a crash of another Boeing 737 Max 8 in Ethiopia earlier this month that killed 157 people.

The Lion Air plane had issues on several flights before it crashed, with terrifying episodes of loss of altitude possibly related to an automated anti-stall system.

An earlier report issued by Indonesian aviation regulators describes technical problems aboard the plane’s penultimate flight. It does not mention that a third person was in the cockpit along with the pilot and co-pilot.

Tjahjono said NTSC investigators have visited Boeing to carry out a reconstruction of that next-to-last flight. The agency will publish results of its investigation in August or September, he said.

Boeing 737 Max 8 aircraft have been grounded in many countries following the two crashes.

A preliminary report from Tjahjono’s agency issued in December stopped short of declaring a probable cause of the Oct. 29 crash. But it provided details about pilots’ earlier struggles to fly the highly automated jet and Lion Air’s difficulties with fixing sensors on the plane. Niniek Karmini, Jakarta, AP