Banderas as Almodovar is a triumph of subtlety, wit 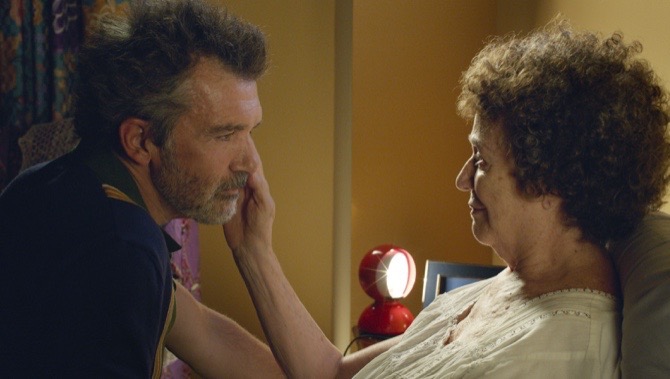 Antonio Banderas (left, as Mallo) and Julieta Serrano (as Mallo’s mother) in a scene from “Pain and Glory”

Don’t get that storyteller look,” film director Salvador Mallo’s elderly mother admonishes him at one point in “Pain and Glory.” It’s hard not to chuckle, because the character is a thinly veiled stand-in for Pedro Almodovar himself _ the film’s director, of course, but also one of the great storytellers in cinema today.

Mallo’s mother is telling her son that she doesn’t want to be fodder for his films. But as Almodóvar’s many fans well know, that’s impossible; the Spanish legend has used his late mother, his childhood, his craft, his sexuality and almost everything else about his life to make his brilliantly eclectic films over the decades.

And here, he’s doing it more than ever. Though significant parts are fictionalized, “Pain and Glory” is a deeply personal quasi-autobiography starring, happily for us, Antonio Banderas, Almodovar’s longtime collaborator. Though Banderas apparently wears some of the director’s real clothing, this is not an exercise in mimicry; it’s an exquisitely lived-in performance by an actor who so grasps the essence of the man he’s portraying that he can be as subtle as he wants, like the quietest notes on a finely tuned instrument.

The film is basically a dialogue between Mallo’s present and his past, at a difficult crossroads. He’s achieved fame and wealth but no longer fits the provocateur label he once had. He lives alone (in an eye-popping, art-filled apartment modeled on Almodovar’s own). He suffers from tinnitus, migraines, back pain from a recent operation, and a disturbing choking reflex when eating. And he suffers mentally, too, from anxiety and depression, not to mention grief over the recent death of his mother.

Worst of all, Mallo is prevented by his physical and mental ailments from continuing to make movies, the only pursuit that gives him meaning. In a fog of pain medication and regret, he looks back at his life.

The flashbacks take us to an impoverished village in Valencia where Mallo, as a young boy (a beautifully expressive Asier Flores), emigrates with his parents, forced to make do in a cave dwelling. His mother, played by Almodovar’s luminous longtime muse Penelope Cruz, is desperate to send her clever son to school, and arranges for a scholarship to a religious seminary. “I don’t want to be a priest!” the boy cries.

We also see, later in the film, the stirrings of the young boy’s first sexual desire; these unexplained feelings, provoked by a handsome young laborer that the boy is teaching to read and write, are so overpowering that they cause little Salvito to faint. (The brief encounter will resonate beautifully _ and heartbreakingly _ later in the movie.)

In the present, we watch Mallo engage in a series of meaningful reunions. The most momentous of these is with a drug-addicted actor, Alberto (an arresting, wild-eyed Asier Etxeandia) with whom he’s been bitterly estranged since Alberto starred in one of Mallo’s films decades earlier. The reunion _ necessitated by a joint invitation to appear at a retrospective _ somehow leads to Mallo’s trying heroin for the first time, sending him further into a deep mental fog. (Interestingly, Banderas and Almodovar went through their own period of estrangement.)

But Alberto’s re-emergence will lead to an even more important reunion for Mallo, with a longtime lover (an excellent Leonardo Sparaglia), now living on another continent. It’s too complicated to explain how the two find each other, but this beautifully layered scene _ happy, melancholy, wistful _ is one of Banderas’ most effective.

Then there’s a “reunion” with Mallo’s beloved late mother, perfectly embodied in old age by 86-year-old Spanish star Julieta Serrano, in which the two come to terms with some sobering truths.

Some may find the film too loosely plotted, a series of vignettes more than a single, tight narrative. But they only need to sit back, listen to the beautiful score by Alberto Iglesias, and let Almodovar weave it all together _ from the first meditative shot of Banderas to the satisfying surprise of the ending shot _ as only Almodovar can. Jocelyn Noveck, AP

“Pain and Glory,” a Sony Pictures Classics release, has been rated R by the Motion Picture Association of America “for drug use, some graphic nudity and language.” Running time: 113 minutes.