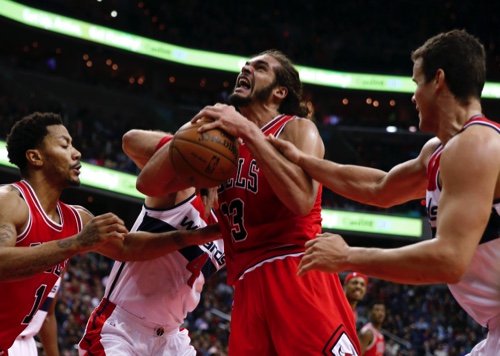 Washington survived a furious fourth-quarter charge by Houston to beat the Rockets 104-103, moving into a share of the lead for the NBA Southeast Division.
Elsewhere, Chicago narrowly defeated Indiana to stretch its Central Division lead, and the Los Angeles Clippers beat Utah for the 12th straight time.
Washington’s Bradley Beal scored 33 points and Paul Pierce added 21 for the Wizards, who began a five-game road trip in good style, notching a third-straight win and moving level with Atlanta in the division,
James Harden scored 33 points – including a 3-pointer with under a second to go in regulation to get Houston within a point.
The Rockets outscored the Wizards on second-chance points (18-9) and points in the paint (50-34) but were plagued by poor shooting while Washington shot 93 percent from the free-throw line and 44.4 percent from beyond the arc.
Chicago extended its winning streak to seven with a 92-90 win at Indiana.
Jimmy Butler had 27 points and nine rebounds while Pau Gasol had 20 points for the Bulls, who had lost on their previous four trips to Indianapolis.
Chris Copeland scored 13 of his 17 points in the fourth quarter for the Pacers, who fought back from 21 points down in the second half to take the lead with 6:15 left but could not hang on.
Los Angeles beat Utah 101-97 for its 12th straight victory over the Jazz, breaking the franchise record for consecutive losses against one club.
Blake Griffin scored 24 points and Chris Paul finished with 20 points and eight assists for the Clippers, who never trailed in the fourth quarter despite leading by no more than five points.
Gordon Hayward scored 22 points for the Jazz and Rudy Gobert added 13 rebounds and 11 points off the bench. Shooting guard Alec Burks missed his second straight game because of chronic soreness in his left shoulder. He also sat out two games early this month for the same reason.
Brooklyn held on to beat Sacramento 107-99, with Mason Plumlee continuing his impressive play with a team-high 22 points.
Orlando won 102-101 at state rival Miami, led by 26 points from Nikola Vucevic.
Milwaukee pulled away to win 104-94 in overtime at Charlotte, with Brandon Knight scoring 18 points, including a layup to force overtime. AP