Beijing asks for US help in hunting down fugitives 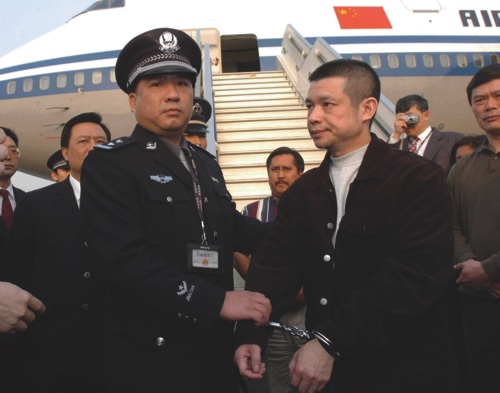 Yu Zhendong, right, accused of embezzling $485 million, is arrested by Chinese police after he was returned by U.S. authorities

A senior Chinese diplomat yesterday called on the U.S. and other Western countries to put aside their wariness of China’s justice system and work with Beijing to send back officials who have absconded overseas with ill-gained loot.
Xu Hong, director-general of the treaty and law division for China’s Foreign Ministry, said at a news conference that some countries have “passive attitudes” about signing extradition treaties with Beijing.
“China is ready to sign an extradition treaty, but it looks like the United States is not prepared to do so,” Xu said.
The United States, Canada and Australia — the most popular destinations for Chinese officials accused of corruption — have yet to sign extradition treaties with China.
Analysts say the countries are reluctant to hand fugitives suspected of economic crimes to Beijing because of concerns over whether they would get fair trials, and because of China’s use of the death penalty for such crimes.
Beijing has estimated that since the mid-1990s, 16,000 to 18,000 corrupt officials and employees of state-owned enterprises have fled China or gone into hiding with pilfered assets totaling more than 800 billion yuan (USD135 billion).
Corruption has eroded the public’s trust so much that the Communist Party considers it a threat to its grip on power. President Xi Jinping has made fighting corruption a priority since he took office in early 2013.
Xu acknowledged that many corrupt Chinese officials had fled to the U.S. and Canada but few have been repatriated.
Only two economic fugitives have been brought back from the U.S., and it took China 12 years to bring back a smuggler from Canada. “It was too long,” Xu said.
Washington has agreed to more dialogues and cooperation, but there is little evidence to suggest the U.S. would be willing to obligate itself to surrender alleged criminals to China. AP