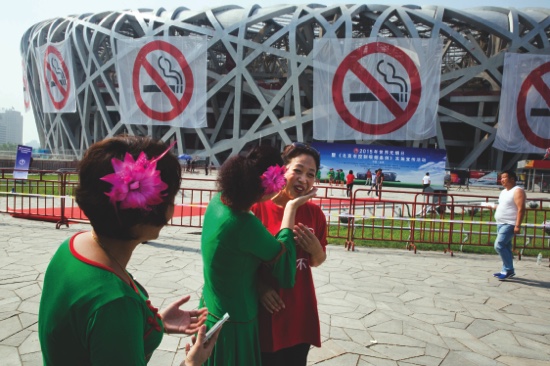 A downtown hotpot restaurant was the first business to get an official warning for breaking Beijing’s toughened smoking ban, as inspectors swooped to enforce the new regulation yesterday.
On the first day of the ban, which prohibits smoking in all indoor public places, workplaces, and on public transport, authorities sent more than 1,000 inspectors to government agencies, hospitals, schools, hotels, restaurants and entertainment venues to ensure it is being followed.
The inspectors found cigarette butts in the hotpot restaurant’s washroom yesterday morning, with the restaurant also failing to publicize the smoking complaint hotline 12320 on its no-smoking posters.
Inspectors said they will visit again in two days to check the restaurant’s compliance, and warned of a fine up to 100,000 yuan (USD1,614) if it fails to comply.
The new ban was passed by Beijing’s municipal legislature in November. Individuals caught smoking in public places may be fined 200 yuan (USD32), while businesses will have to pay up to 100,000 for failing to discourage smoking on their premises.
As the world’s largest tobacco maker and consumer, China has more than 300 million smokers, almost the size of the U.S. population, and another 740 million people are exposed to second-hand smoke each year.
Ma Yongsheng, who runs a restaurant in Beijing, canceled a wedding banquet reservation yesterday, as a guest insisted on smoking during the meal.
“If we continue to host guests who smoke, we’ll surely be fined,” Ma said.
At Beijing Capital International Airport, people gathered at two designated outdoor smoking areas to have a last puff as indoor smoking rooms in the airport’s three terminals have all been closed.
While regulators have vowed strict implementation, some still doubt the feasibility of the new ban and fear authorities’ resolve to curb smoking could taper over time and leave the ban as ineffective as its predecessors.
Beijing has had smoking bans in place since as far back as the 1990s, and stepped up the campaign before the 2008 Olympics, but the bans have always been weakly enforced.
A Xinhua reporter spotted people smoking indoors in a downtown hospital yesterday.
“I hope the government’s momentum to curb smoking can last this time,” said someone with the screen name “@skywalker” on China’s Twitter-like service, Sina Weibo. “Just don’t let this ban become another barely-enforced policy nobody remembers after six months.”
At a bus stop during the morning rush hour, a volunteer asked scores of people to finish smoking elsewhere before lining up.
“Most stub out their cigarettes at our request but that’s the most we can do,” the volunteer said. “We are not authorized to fine those who refuse to obey the ban.”
The World Health Organization (WHO) suggested mobilizing the public to help enforce the ban.
“If you see someone smoking in a restaurant, tell them to stop! Talk to the manager or owner, or call the national health hotline 12320 to complain,” said WHO China Representative Bernhard Schwartlander.
China signed the WHO Framework Convention on Tobacco Control (FCTC) in 2003.
The new ban also serves as a test case for a similar move nationwide. Draft legislation for a national ban has been published to solicit public opinions.
In April, China’s top legislature adopted an amendment to the Advertisement Law, banning tobacco advertising in mass media, in public places, public vehicles and outdoors.
China also raised consumption tax on cigarettes at the wholesale level on May 10, a move expected to cut cigarette consumption by 4 to 5 percent and add 100 billion yuan to annual tax revenue. Xinhua