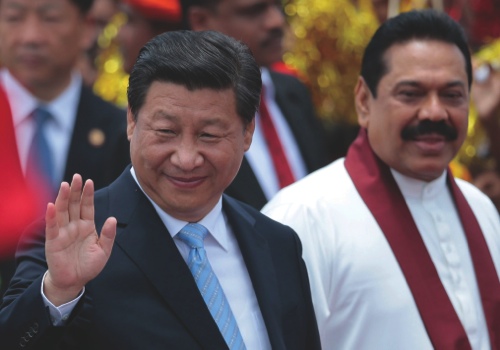 Chinese President Xi Jinping visited Sri Lanka yesterday to forge closer ties and help launch a USD1.4 billion port city project funded by his government.
Xi, the first Chinese leader to visit in 28 years, and Sri Lankan President Mahinda Rajapaksa were expected to oversee the signing of up to 20 agreements, including one for a new coal power plant.
Xi is visiting countries in South Asia this week to seek closer relations and support for his vision of a modern maritime “Silk Road” — a sea route connecting China with Europe. On Monday, he secured backing from the nearby archipelago nation of the Maldives.
The Chinese president planned to help launch Colombo Port City, being constructed on an artificial island off Colombo with $1.4 billion in Chinese loans, according to the builder, China Communications Construction Co. Ltd.
The company said the port city will be a “hub on the marine Silk Road of Asia and position itself as the preferred global tourism destination in Asia.”
Earlier Chinese investment in the port of Hambantota led many to speculate that Sri Lanka is meant to be a key stop along the maritime Silk Road.
Xi also was to launch the final phase of a 900 MW coal power plant valued at more than $1.3 billion.
“I believe that the ship of China-Sri Lanka friendship and cooperation is bound to brave the wind and waves along the magnificent 21st Century Maritime Silk Road to pursue the dream of national development,” Xi said in an article published yesterday in Sri Lanka’s state-run Daily News.
China has become Sri Lanka’s largest lender in recent years, providing more than $6 billion through September 2013 for port facilities, highways and a new international airport.
China also supplied weapons to the government during Sri Lanka’s 27-year civil war that ended in 2009 with the defeat of ethnic Tamil separatists, and has defended the Indian Ocean island nation from allegations of human rights abuses and calls for a U.N. investigation into alleged war crimes. Xi reiterated that backing yesterday.
“China firmly supports Sri Lanka in choosing a development path suited to its national conditions … and resolutely opposes any move by any country to interfere in Sri Lanka’s internal affairs under any excuse,” Xi said in the Daily News. AP