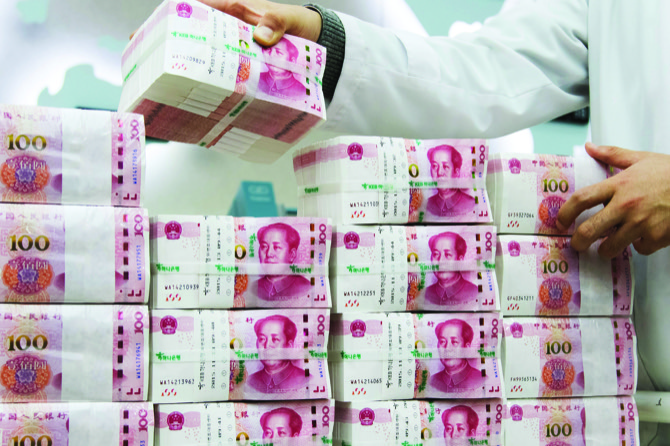 China’s central bank is considering a range of risks in its currency policy, including a worst-case scenario, Governor Yi Gang said.

As the yuan inches closer to the psychologically important level of 7 per dollar amid rising trade tensions with the U.S., the People’s Bank of China governor told Bloomberg in an exclusive interview that the Chinese currency is at a “reasonable and equilibrium level.”

“The yuan’s volatility is normal,” Yi said yesterday in Bali, Indonesia, on the sidelines of the International Monetary Fund and World Bank’s meetings. “The currency has a flexible exchange rate mechanism, which now shows two-way fluctuation.”

“For the full year, the yuan will stay in a reasonable range against the backdrop of an appreciating dollar,” he said.

Yi’s comments come days before U.S. Treasury Secretary Steven Mnuchin is set to release a report in which he could label China as a currency manipulator and as a trade dispute between the world’s two biggest economies shows no signs of abating. The tariff war is weighing on investor sentiment, prompting a sell-off in financial markets last week, and undermining the outlook for global growth, which the IMF downgraded for the first time in two years.

Yi said he had “very good talks” with Mnuchin in Bali, without elaborating.

In a key policy report in August, the PBOC referred to a “bottom-line mindset” in its currency policy. Yi explained yesterday that this means “we have to think thoroughly about all sorts of risks, prepare for the rainy days and for the worst scenario.”

For now, the exchange rate is “relatively stable” and the yuan “is strong among developed countries and developing countries,” he said. The strong dollar and interest rate hikes by the U.S. Federal Reserve have made conditions “a little tight” and “capital has been flowing out of some developing nations,” he said.

The yuan has tumbled more than 9 percent against the dollar in the past six months, making it one of Asia’s worst performers, on the back of tighter U.S. monetary policy and a worsening domestic outlook.

“China is, in fact, in a very good situation, with the overall volatility not big,” he said, adding the fluctuation is “basically similar” to the currencies in developed nations and much smaller than those in developing economies.

“Economic growth, employment, inflation and the two-way fluctuation of the yuan are within reasonable range,” he said.

Yi took over as governor in March as the central bank shifted to a more growth-focused path, with four reductions in the reserve ratio this year and additional measures to funnel credit to businesses.

At the IMF annual meetings in Bali, Yi has leveraged his longstanding links to global economic leaders and fluent English skills to resume constructive talks with the U.S. and build allies with nations on the global trade supply chain.

“Over the last few days, I’ve talked to more than a dozen countries,” Yi said on an international banking seminar panel hosted by the Group of 30. “They all felt the negative impact on their economy” from the trade war, he said.

Yi told delegates at the seminar the nation is seeking to solve trade tensions with the U.S. constructively and will continue to open up its services industry, especially the finance sector. Even so, China is preparing for a protracted conflict, he said.

“We prepare for the worst. You see a lot of people in China now are preparing for the trade tension to be a prolonged situation,” the governor said. “We have a very sincere view that we should seek a constructive solution – not only for us, but our neighbors in the supply chain and for the world.”

Yi said China’s current- account surplus has been narrowing over the years and will likely drop below 1 percent of gross domestic product this year. There are parts of trade between China and the U.S. that aren’t being reflected in the data, such as U.S. subsidiary companies that produce and sell in China, he said on the panel.

In a statement to the International Monetary and Financial Committee, Yi said China won’t use the currency as a tool to deal with the trade conflicts, with authorities continuing to let the market determine the exchange rate. Bloomberg