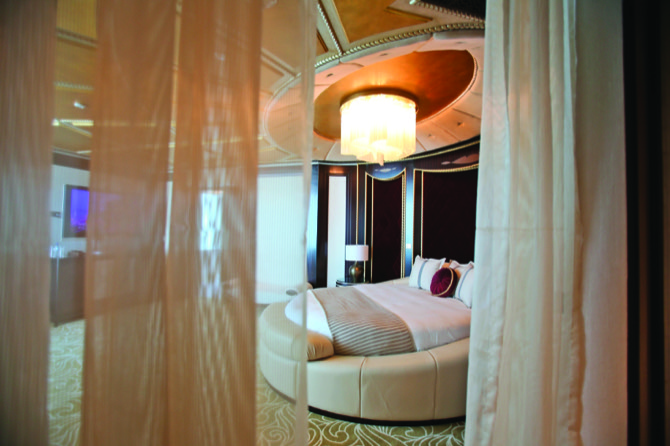 A master bedroom in the St. Regis (Marriott chain) in Abu Dhabi

Investigators believe hackers working on behalf of China’s main intelligence agency are responsible for a massive data breach involving the theft of personal information from as many as 500 million guests of the Marriott hotel chain, a U.S. official said yesterday [Macau time].

Investigators suspect the hackers were working on behalf of the Chinese Ministry of State Security, an official briefed on the investigation told The Associated Press.

The official, who was not authorized to discuss the matter publicly and spoke to the AP on condition of anonymity, said investigators were particularly concerned about the data breach in part because Marriott is frequently used by the military and government agencies.

Marriott, which announced the data breach on Nov. 30, has not disclosed what it knows about the source of the hack, which included the theft of credit card and passport numbers over four years from guests who stayed at hotels previously operated by Starwood.

Marriott acquired Starwood, which includes such brands as Sheraton, W Hotels and St. Regis, in 2016.

“Our primary objectives in this investigation are figuring out what occurred and how we can best help our guests,” Marriott spokeswoman Connie Kim said. “We have no information about the cause of this incident, and we have not speculated about the identity of the attacker.”

The revelation of suspected involvement by China comes amid heightened tension with the U.S. over trade; the arrest in Canada on an American warrant of a top executive of Chinese electronics giant Huawei; and alarm among law enforcement officials about Chinese efforts to steal technology to bolster its growing economy.

President Donald Trump said he would get involved in the Huawei case if it would help produce a trade agreement with China, telling Reuters in an interview Tuesday that he would “intervene if I thought it was necessary.”

Officials from the Justice Department, the FBI and the Department of Homeland Security told the Senate Judiciary Committee on Tuesday that China is working to steal trade secrets and intellectual property from U.S. companies in order to harm America’s economy and further its own development.

Chinese espionage efforts have become “the most severe counterintelligence threat facing our country today,” Bill Priestap, the assistant director of the FBI’s counterintelligence division, told the committee. “Every rock we turn over, every time we looked for it, it’s not only there, it’s worse than we anticipated.”

Priestap said federal officials have been trying to convey the extent of the threat to business leaders and others in government. “The bottom line is they will do anything they can to achieve their aims,” he said.

Cyber-security expert Jesse Varsalone, of University of Maryland University College, said the Marriott hack does have signs of a foreign intelligence agency involvement. They included its duration and the fact that the information stolen, including details about travel by individuals, would be valuable to foreign spies.

“It’s about intelligence, human intelligence,” he said. “To me, it seems focused on tracking certain people.”

Priscilla Moriuchi of Recorded Future, an East Asia specialist who left the National Security Agency last year after a 12-year career, cautioned that no one has put out any actual data or indicators showing Chinese state actor involvement in the Marriott intrusion. Michael Balsamo, Washington, AP