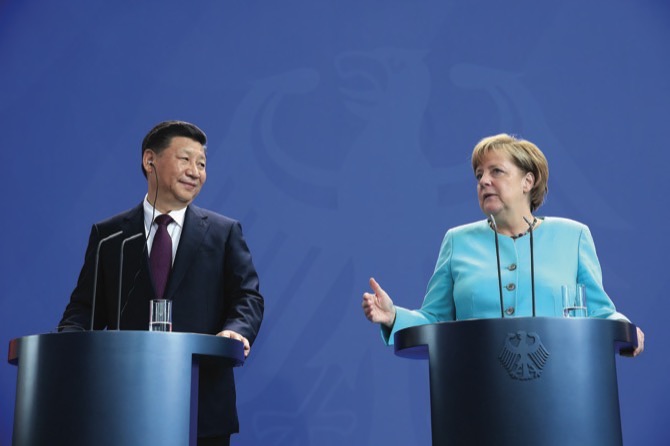 “Our China policy had one key component: how can we sell the largest possible number of German automobiles in China,” Ischinger, who now chairs the annual Munich Security Conference, recalled in an interview in Berlin.

Since Ischinger’s time in office at the turn of the century, Germany’s view of China has been turned upside down. The idea that Beijing would adopt more western values and democratic practices proved to be completely wrong, he said. If anything, “it’s going in the opposite direction,” he added.

With governments from Japan to Canada and Australia taking a harder line on China as President Donald Trump steps up his trade war, Germany too is toughening its policy toward China on matters such as investment or intellectual property. But it’s an especially high-risk strategy for Berlin at a time when its export-dependent economy is flirting with recession.

As Chancellor Angela Merkel prepares to visit China this week accompanied by a high-ranking business delegation, she faces a particularly delicate set of policy objectives: maintaining that hard line on Beijing while urging a resolution of the trade war and continuing to press for reciprocal access to China’s lucrative market.

According to a Chinese official who asked not to be identified commenting on policy, Trump’s attempts to lobby European leaders such as Merkel appear to have worked in the short term. Trump has provided a model for world leaders to be globalist in their words and protectionist in their actions, the person said.

Indicative of that balancing act is Merkel’s approach to the situation in Hong Kong. While her administration urged Beijing to engage in dialog and respect the rule of law, Merkel has declined an invitation to meet with protesters, her spokesman said on Wednesday.

“We are in a difficult position with China: On the one hand, China is our trading partner, and on the other we have to deal with China as competitor,” German Deputy Economy Minister Claudia Doerr-Voss said in a speech to industry earlier this year. “Unfortunately, we have to conclude that we still have massive trade restrictions in China, and that we cannot expect any miracles.”

Germany is China’s biggest European trading partner by a long way, with bilateral sales worth some USD195 billion last year. That, plus her sheer political longevity, gives Merkel clout that eludes her European partners: she is making the 12th trip to the Asian giant of her almost 14 years in office. Germany is also one of few western countries to run a trade surplus with China, with auto makers such as VW and BMW now more dependent on Chinese sales than those in the U.S. Still, that reliance is viewed in Berlin as a potential liability as well as an achievement.

As yet, however, there is little evidence that Germany’s position toward China has relaxed as the risk of recession has grown. Indeed, Germany sees a risk that Chinese protectionist sentiment could prevail during the trade war and end what limited reforms have taken place, said a senior government official who asked not to be named discussing strategy. At the same time, Germany’s short-term economic fortunes hinge on China and the U.S. resolving their trade dispute, and so Merkel’s government is keen to see a willingness in Beijing to reach a deal, the official said.

How Europe’s exporting giant went from a key China proponent to the leading advocate of a more defiant European stance is both a reflection of Beijing’s rising global power and an indication of how it is wielding that clout. Germany has been a target of China’s ambition, as a focus of Chinese moves to buy up strategic companies as well as at the apex of concerns including cyber security.

A turning point was the public and political backlash over the takeover of German robot maker Kuka AG by China’s Midea Group Co. in 2016. Germany learned from losing one of its industrial pearls and last August for the first time vetoed a potential Chinese takeover, of German machine tool maker Leifeld Metal Spinning AG, angering Beijing in the process.

German Economy Minister Peter Altmaier has pushed an industrial policy of encouraging European champions to better compete against Chinese giants, even though a proposed merger of Siemens and Alstom train units was blocked in Brussels.

There are signs that German industry is in lockstep with the government’s aims. In January Germany’s industry lobby BDI announced a turnaround in its China strategy, labeling China a “systemic competitor” and arguing that “German industry must prepare itself for this new reality,” while the system of open markets in Europe “must be made more resilient.”

Germany’s dilemma is sharpened by China’s moves to divide the European Union, both through the so-called 16+1 forum with eastern European states and by signing up individual EU members including Malta and Italy to President Xi Jinping’s Belt and Road infrastructure program. The upshot is that whereas all 27 member states stood together on Brexit, the EU struggles to speak with one voice on China policy.

Still, alongside German legislation to protect companies, the EU has acted to tighten up investment scrutiny, brought in instruments to tackle dumping of steel and measures to shield IT. China policy is not about to soften under the incoming commission, according to a senior EU official with knowledge of trade issues.

China is angry about the measures, but the EU will hold to its stance even as the economy staggers because it sees a risk China could ramp up exports subsidies even more, the official said.

For Ischinger, the German diplomat, the priority is developing a more coherent, long-term approach to China. “It’s one of the biggest challenges for the EU as a whole and for Germany as a country that now depends as much on China as it used to on the United States,” he said.

German media group Axel Springer AG, publisher of the newspapers Die Welt and the best-selling Bild tabloid, has meanwhile adopted a China-skeptic tone, and is prodding the chancellor to take up the case of the Hong Kong protesters with the Chinese leadership.

For its part, Beijing is shouldering a growing burden of U.S. trade tariffs while being buffeted by the anti-China protests in Hong Kong. That makes it keener to keep the EU on board with common goals such as multilateralism, said Mikko Huotari, deputy director of the Berlin-based Mercator Institute for China Studies. Given Germany’s importance to China, Merkel’s visit “isn’t simply important for the optics,” he said in a statement.

“The trip comes at an exceptionally tense time for Beijing,” Huotari said. “The chancellor is traveling to a China that is extremely challenged on multiple fronts politically and economically.” Birgit Jennen, Patrick Donahue & Arne Delfs, Bloomberg