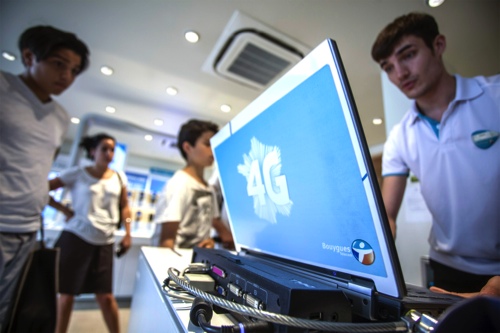 The bid submission period for four licenses of the Fourth-Generation (4G) Long-Term Evolution mobile communication operation began yesterday and will end on November 18. Following the announcement in the Official Gazette on Monday regarding the licensing process, the Bureau of Telecommunications Regulation (DSRT) held a press conference yesterday to provide more details regarding the announcement.
During the event, DSRT’s acting director, Hoi Chi Leong, estimated that it will take two to three months for his department to analyze the documents before submitting its recommendation to the government.
“We estimate that the result of the bidding will be published in the first quarter next year,” he said. According to the Gazette announcement, operators that are awarded the concession must start providing 4G data services in 2015 and achieve network coverage for 50 percent of the MSAR territory. In 2016, operators will have to fully cover the Macau territory with their 4G data networks.
“Of course, some companies that have already expressed their interest in participating in the bidding told us that they can even do it faster,” he said.
Hoi Chi Leong was asked about the estimated price range of the future 4G data service, the compensation to customers for network breakdown, and the rationale behind the decision to issue four licenses. He claimed that the service fee for the 4G data services will be comparatively lower than those of the Second-Generation (2G) and Third-Generation (3G) services, and will provide a data-transferring speed that is three to four times faster than the 3G services. This is despite the fact that the nominal price of 4G services may be the same or even higher than the 3G services.
“From a technical analysis [perspective], (…) the price of 4G services should be lower than that of 3G. This mainly refers to the calculation of [charge] per unit of [data transferred],” he said.
“If you are using 4G, you may use one gigabyte [of data] when usually you would use only 100 megabytes [with the 3G services]. Although you may have paid more in a month [for 4G data services], the [fee] is actually lower because you are actually using more data (…) It does not mean that the service fee of 4G is higher than that of 3G,” he said.
The director also suggested that one of the licensing criteria was the pricing scheme proposed by the bidders. He said that DSRT will have to wait for the bidders to submit the documents before being able to reveal the price range of the future 4G service.
One of the issues that residents are concerned with is network stability.
In fact, several major network breakdowns have taken place in recent years. Hoi Chi Leong pointed out that the government has stipulated that future concessionaires must provide a compensation scheme for large-scale network failure.
DSRT will draft instructions regarding the minimum compensation requirements. However, the acting director said that the Bureau welcomes bidders to provide suggestions that are even more satisfying than the government version.
“We are doing some research [on the compensation scheme] and will look at the suggestions in the bidding documents. If the government is satisfied with the bidders’ suggestions, then the government doesn’t have to set up a minimum requirement,” he said.
He later revealed that the reason the government did not specify the minimum requirement was to discourage bidders from settling at the lowest common denominator instead of providing a scheme that is more acceptable for residents.
As for the decision to release four licenses and a potential fifth one in 2016 or 2017, Hoi Chi Leong explained that the decision was made based on the development of the market. He also reiterated that there are no prerequisites for awarding the licenses, and that DSRT does not give special considerations to bidders already providing telecommunication services in Macau.

2G and 3G networks will coexist with 4G

Talking about the future of the 2G and 3G networks, Hoi Chi Leong has said that the two will coexist with the 4G network for some years after the new service is available. The acting DSRT director also revealed that the Bureau is in the final stages of analyzing the future of the 2G network. “Given the considerable amount of tourists [visiting Macau], some of whom are from regions that are still using 2G services, we would not rule out the continuing of the 2G network under restricted conditions if our frequency resources can afford it,” he said. Mr Hoi also said that DSRT has already vacated some 2G frequencies and allocated them to newer generation networks.