Bolt in controversy at Commonwealth Games 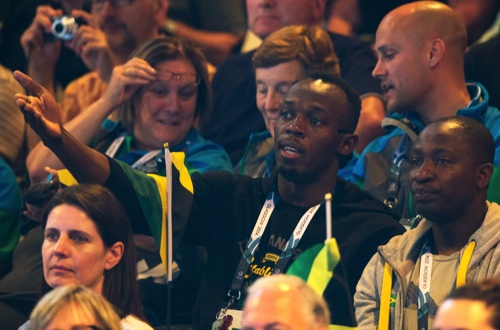 Still days away from running, Usain Bolt was at the center of a controversy at the Commonwealth Games yesterday for apparently criticizing his games experience so far.
The Times of London says it spoke to Bolt as he left the athletes’ village in Glasgow on Tuesday, and quoted him as saying he was “not really” having fun in Glasgow and the games were “a bit s—.”
Bolt tweeted yesterday that “I’m waking up to this nonsense” and called the report “lies.”
Bolt spent Tuesday mixing with Prince William, his wife Kate, and Prince Harry. Yesterday, he watched the Jamaica netball team lose to New Zealand, and was blocked by his manager from the media, saying only “Awesome” to questions about his opinion of the games.
His status as the world’s fastest man was safe on the track, where Michael Mathieu of the Bahamas was the fastest qualifier into the semifinals of the 200 meters.
Mathieu, Andre de Grasse of Canada and Danny Talbot of England were the leading runners among 24 to advance to today’s semifinals, ahead of the final that evening.
The Bahamian timed 20.55 seconds, well outside the world record of 19.19 held by Bolt, who is limiting himself, following a left foot injury, to only Jamaica’s 4×100-meter relay on the weekend.
Also, the Canadian team of Meaghan Benfeito and Roseline Filion won gold in the women’s synchronized 10-meter platform, the first diving event at the Royal Commonwealth Pool in Edinburgh.
Australian diver Matt Mitcham, the 10-meter platform gold medalist from the 2008 Beijing Olympics, was among the qualifiers for the men’s 1-meter springboard.
At the boxing, Australian Daniel Lewis was ruled out of the welterweight quarterfinal after failing a medical check. He called for headguards to be restored for amateur fighters.
Lewis had a badly cut eye after beating Kehinde Ademuyiwa of Nigeria on Monday. Lewis did not recover sufficiently in time for him to meet Mandeep Jangra of India in his next bout, so Jangra was given a walkover.
Lewis criticized a move last year to remove headguards from amateur male fighters, with experts suggesting they contributed to concussions.
“For all these people debating about headgear for amateurs, bring the headgear back 100 percent,” Lewis said. “When you have to fight five times in a week this ruins people’s dreams.” AP