Boxing | A confident Algieri heads to Macau for Pacquiao 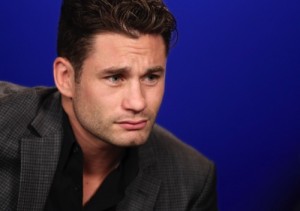 In the days before his last fight — a stunning upset few in boxing saw coming — Chris Algieri worked his regular job as a personal trainer. At night he went home to his parents’ house on Long Island, where he lives in the basement.
Unusual for a fighter, but Algieri is nothing if not an unusual fighter.
He has an advanced education, a martial arts background and looks that make the female fans smile. He’s also has a fight against Manny Pacquiao this month that, should he win, would make him not only one of the best stories in boxing, but one of the sport’s biggest names.
“He’s one of the greatest fighters that ever lived,” Algieri said about Pacquiao. “But I have the tools and talent to win this fight. I just have to go out there and be myself.”
Fresh off a training camp on the Las Vegas Strip, Algieri heads to China this week to fight Pacquiao on Nov. 22 in the gambling enclave of Macau. He will arrive with an undefeated record and holding a title, but oddsmakers make him a heavy underdog against the Filipino who has long been one of the biggest attractions in boxing.
And he will do it largely unknown to all but the most avid of boxing fans.
“People seem to think I’ve come out of nowhere,” Algieri said Tuesday. “I’ve been an underdog in a lot of fights, and this one is no different.”
What is different about this fight is that it is bigger than any Algieri has ever been in. He’s going around the world to fight one of the world’s best fighters in a pay-per-view bout that, aside from a fight with Floyd Mayweather Jr., is about as big as it gets.
There’s little outside of his height advantage and a very good left jab that makes anyone think he will win. But there is no one in his camp who doesn’t think he is ready for both the moment and everything Pacquiao has to bring.
“Everything leading up to this fight has been a kind of dress rehearsal for the big show,” Algieri said. “But I guess we won’t really know until the 22nd.”
So far, at least, Algieri has outperformed expectations as he prepares for Pacquiao. His story as a college graduate who wants to become a doctor has resonated with fans, and he’s embraced his turn in the spotlight.
Just don’t buy the pay-per-view expecting to see the light-hitting (eight knockouts in 20 pro fights) Algieri getting in any unnecessary ring wars with Pacquiao in a bout that will be fought at a 144-pound limit.
“It’s genetic, I’m tall for the weight class,” Algieri said. “I’m not built to go in there and stand in front of a man and trade bombs. Why would I do that when I’ve got length, I’ve got range, I’ve got speed and I’ve got foot work and defense?”
Algieri won his spot in the Pacquiao sweepstakes by getting off the canvas twice in the first round in June to narrowly outpoint Ruslan Provodnikov and win a piece of the 140-pound title. Algieri outboxed Provodnikov, using his jab to pile up points and win the decision on two of the three ringside scorecards.
That got him a belt and the Pacquiao fight, if not the respect of everyone in boxing. That includes Pacquiao’s trainer, Freddie Roach, who suggested last month that Pacquiao’s sparring partners were better than Algieri.
“He’s wasting his time. I don’t even read those reports,” Algieri said. “Every day it’s a new thing but they don’t make a difference come fight night. Maybe it worked on other guys in the past, but it’s not going to work on me.”
Just to be on the safe side, Pacquiao’s handlers got a rematch clause in the fight contract should Pacquiao lose. And, while oddsmakers don’t like Algieri’s chances, the consensus is that Pacquiao is slowing down as he nears the end of a long and extraordinary career.
Algieri likes his chances both in the ring and as a new face of boxing.
“I would hope my win would elevate the sport to more mainstream with crossover appeal,” he said. “We need to get more people watching boxing. I love this sport and the more attention drawn to any fighter, myself included, in a positive way is good for the sport.” Tim Dahlberg, Las Vegas, AP