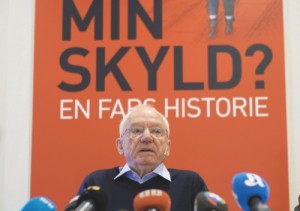 Jens Breivik, the father of Norwegian terrorist Anders Behring Breivik speaks at a press conference in connection with the launch of his book, “My fault?”, in Oslo, Norway

The father of Norwegian mass killer Anders Behring Breivik says he fears his son is becoming even more extreme and dangerous in prison.
In his first news conference since the July 22, 2011, attacks that killed 77 people, Jens Breivik said yesterday he had requested to visit his son at the Oslo prison where he is serving a 21-year sentence that could be extended indefinitely. But the convicted terrorist and right-wing fanatic rebuffed him in a letter, saying his father had to adopt a “fascist” ideology for them to have any contact.
“The letter scared me,” the elder Breivik told reporters in Oslo in connection with the launch of his book “My fault?”
“I think he’s just becoming more and more extreme. Maybe he’s becoming more dangerous, too. I don’t know.” A self-described nationalist militant on a crusade to rid Europe of Muslims, Breivik set off a powerful bomb that killed eight people in Oslo’s government district. He then went on a shooting rampage on Utoya island, killing 69 people — mostly teenagers — at the annual summer camp of a left-leaning youth group.
“I think a lot about those who lost their lives and those who were injured,” Jens Breivik said. He spoke slowly. At times his voice cracked. “I wish I could ask for forgiveness on Anders’ behalf.”
Breivik grew up with his mother in Oslo and had only intermittent contact with his father, a Norwegian diplomat who remarried and moved to Paris. Jens Breivik said he regretted losing a custody battle for his 4-year-old son after social workers expressed concern about his well-being.
“I could have influenced him in a positive direction. But it didn’t happen,” he said.
They met three or four times a year but after his son turned 16 they lost contact — something Jens Breivik said he felt guilt over.
“If I had had more contact with him, If I had been a better father, then maybe he would have been a different person today,” he said, adding that he never saw any signs during his son’s childhood that foretold his sinister path toward extremism and violence.
“It’s completely unfathomable to me that my own son would have done such a thing. I will never understand it,” he said. Karl Ritter, Stockholm, AP