To promote contemporary art education, the Art For All Society (AFA) is set to launch a range of art courses in October. Twelve art programs for both children and adults will include Installation Art; Florentine Painting; Life Drawing and Life Oil Painting; Art and Meditation; Digital Manipulation Workshop; Stream-of-Consciousness Workshop; Ready-made Art; Art x Thinking; Story of Art; Introduction to Traditional Chinese Painting; Curatorial Theory and Practice; and Painting for kids. Applications are now open to the public. 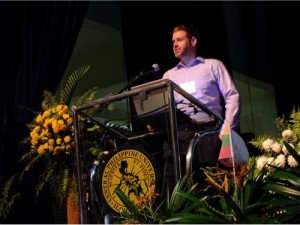 The University of Macau’s (UM) assistant professor of psychology Brian Hall (interviewed last week by the Times) and psychology student Wu Yan recently participated in an international service learning program in the Philippines.  More than 100 students from over ten Asian universities participated in the program, hosted by the Central Philippines University and organized by a consortium of universities in the Philippines. United Nations officials, presidents of local universities, leaders of nongovernmental organizations, and scholars from around the world attended the event to discuss with student participants the impact of disasters on the environment, as well as on the physical and mental health of affected populations. Dr Brian Hall was invited to give a speech on disasters’ impact on the mental health of surviving victims and evidence-based intervention strategies.

The operating theaters at Conde São Januário hospital will undergo renovation works which are expected to last for about a year.  The Health Bureau said in a statement that in recognition of the usual constraints prompted by renovation works, they have worked on an internal reorganization, allowing urgent surgeries to continue being performed. Regular surgeries, however, will be rescheduled. Nevertheless, the bureau stated that Macau’s public hospital will continue to perform surgeries “in accordance with a plan to be adjusted to such situation.”  Revamping operation rooms includes the full replacement of a 30-year-old air conditioning system, which is no longer efficient in maintaining a sterile environment inside the operating theatre.  Other replacements will allow operation rooms to accommodate “top [quality] equipment,” computerized systems, and to enable the development of robotic surgery.

A driver involved in a fatal car accident has been named an involuntary manslaughter suspect, after the Public Prosecutions Office (MP) concluded its preliminary investigation. Coercive measures have already been implemented, the MP declared in a statement. The man, whose surname is Leong, is a 40-year-old Macau resident and professional driver. On September 2, he was driving a cement truck and stopped at the intersection of Avenida de Venceslau de Morais and Rua Francisco Xavier Pereira. The driver then accelerated and allegedly drove close to the pavement when he felt the vehicle vibrating. He stopped upon hearing shouting from pedestrians that someone had been hit by the truck. An elderly woman, aged 80, did not obey traffic signals and attempted to cross the road, but her upper body was crushed by the cement truck. She died at the scene. The prosecutor investigating the case found enough evidence to launch an involuntary manslaughter case, arguing that Mr Leong acted carelessly, which resulted in a person’s death.  The driver was detained and coercive measures were applied. The case has been referred to police authorities for further investigation.