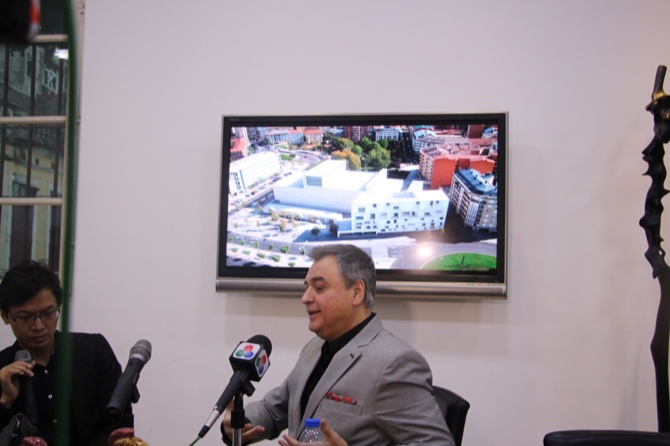 The Cultural Affairs Bureau (IC) has accepted the explanation offered by the architecture firm of Carlos Marreiros and will now resume with the project plan. Following a brief investigation, the IC has concluded that there is no evidence that the bidding firm has violated the terms of the tender. Therefore, the department will continue with the project as planned. On November 17, it was announced that MAA Marreiros Architectural Atelier Limited had won the tender to design the New Central Library at a tender price of MOP18.68 million. Days later the firm was accused of plagiarism, with critics highlighting similarities between the New Central Library project and an award-winning auditorium in the Spanish city of Leon. Marreiros denied knowing about the Spanish auditorium and said that there were many buildings around the world that have similar components but are unique when “seen holistically.”

Lawmaker Pang Chuan supports the Civic and Municipal Affairs Bureau (IACM) in embalming the bear Bobo, who died last week. In Pang’s opinion, “it’s good” that IACM has proposed to embalm Bobo. He commented that in many other regions, animals are frequently embalmed to promote scientific education, and that many of the local schools have embalmed and placed animals on display. IACM president José Tavares said that the bureau “will deal with Bobo respectfully, and will find experts and scholars to embalm Bobo.” José Tavares emphasized that he hopes people will still be able to see Bobo in the future and learn about his history.

The Judiciary Police arrested two local male residents (34 and 43 years old) for drug trafficking, according to a PJ report released last week. The two suspects were active in selling drugs to people who frequently visited casinos. The police seized drugs worth MOP180,000, according to market prices. One of the suspects had already been sentenced to jail in the past for drug trafficking. 156.9 grams of drugs were seized from hotel rooms as well as drug packaging tools that belonged to the two suspects. The police believe that the duo was packing the drugs to look like tea in order to sell them.