Japanese fans celebrated Kei Nishikori’s stunning win over top-ranked Novak Djokovic at the U.S. Open, staying up to the wee hours of yesterday morning to catch a moment of tennis history. The 24-year-old Japanese ace beat Djokovic 6-4, 1-6, 7-6 (4), 6-3 in stifling heat to become the first man from Asia to reach a Grand Slam singles final. “The fact that he is the first Japanese to reach the final is very inspirational,” said Tokyo office worker Keiko Mikami, who stayed up late to watch. “I hope we can all learn the value of never giving up from him.” About 350 supporters crammed into a hotel reception area in Nishikori’s hometown of Matsue, a seaside city of nearly 200,000, to watch a live broadcast of the match that ended just after 4 a.m. local time. 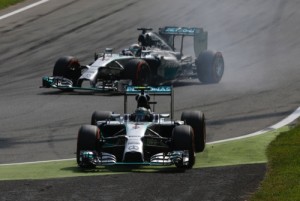 Lewis Hamilton pressured Nico Rosberg into a mistake and overtook his Mercedes teammate and rival to win the Italian Grand Prix yesterday. The key pass came about midway through the race as Hamilton had recovered from a poor start to pull up right behind Rosberg. Clearly feeling Hamilton’s presence behind him, Rosberg drove straight through the Monza circuit’s first chicane at the end of the main straightaway and was slowed as he slalomed through obstacles. All Hamilton had to do was stay on the track and he easily passed Rosberg and then cruised to his sixth victory of the season and 28th of his Formula One career. Hamilton also cut Rosberg’s championship lead from 29 to 22 points with six races remaining.

Faf du Plessis led South Africa to a six-wicket win over Australia in the final of the one-day international tri-series at Harare Sports Club on Saturday. Du Plessis hit 96 from 99 balls and just missed out on his fourth century in five innings in the tournament as South Africa chased down Australia’s mediocre total of 217-9 with nearly 10 overs to spare to take the triangular title.