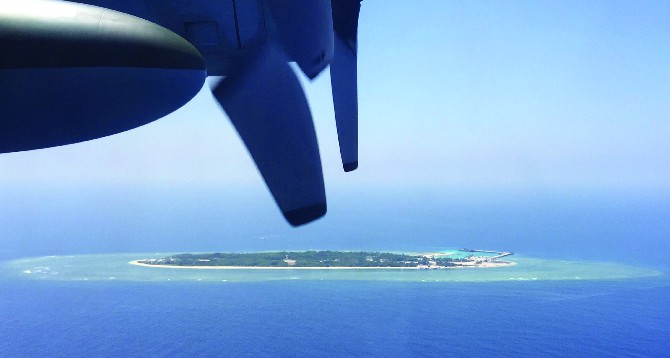 The Chinese Embassy in Britain yesterday voiced deep concern about and firm opposition to the recent remarks by a senior British official on the South China Sea as they disregard facts and undermine regional peace and stability.
Referring to British Secretary of Defense Ben Wallace’s “extremely irresponsible” remarks made during a visit to Vietnam, a spokesperson for the Chinese embassy said the remarks “disregard the historical merits and objective facts of the South China Sea issue, deliberately sow discord among regional countries and thus, undermine regional peace and stability.”
China’s sovereignty, rights and interests in the South China Sea have been formed in the course of a long history and have abundant historical and legal basis, the spokesperson said, adding that they have been upheld by successive Chinese governments all along.
The so-called “arbitral tribunal ruling” on the South China Sea is illegal, null and void, the spokesperson stated, noting that the arbitration violated the “principle of state consent” and the arbitral tribunal exercised its jurisdiction ultra vires and rendered an award in disregard of law.
China always advocates friendly negotiations and consultations on issues in relation to the South China Sea, treats its littoral neighbors as equals and exercises maximum restraint when safeguarding its sovereignty, rights and interests in the South China Sea, the spokesperson stressed.
In contrast, Britain claims to uphold “rules-based international order” but its cherry-picking of rules of international law reveals a typical practice of hypocrisy and double standard, the spokesperson noted.
With the joint efforts of countries in the region including China, passage through the South China Sea has been smooth and safe all along, the spokesperson said, calling the allegation that “freedom of navigation is under threat” in the South China Sea “untenable.”
“If indeed this allegation is true, the threat could only come from the one who deploys carrier strike group to the South China Sea half a world away and flexes its naval muscles to heighten the military tension in that region,” the spokesperson said.
According to Wallace, Britain, a former influential colonial power who used its military superiority to subdue Asian countries, is increasing maritime presence in the Indo-Pacific region to uphold the so-called “rules-based international order.”
“Gunboat diplomacy no longer works in the 21st century. As a country outside the region, Britain should refrain from stretching its arms too far,” the spokesperson said. MDT/Xinhua