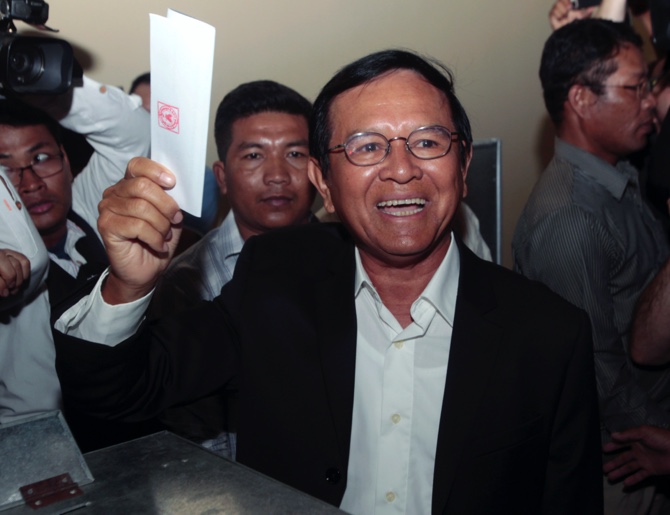 A Cambodian court yesterday lifted some restrictions on detained opposition leader Kem Sokha, essentially freeing him from house arrest and taking some of the spotlight off his exiled colleague who is attempting to return to the country.

Sam Rainsy, the co-founder with Kem Sokha of the banned Cambodia National Rescue Party, arrived in Malaysia from Europe on Saturday on a well-publicized trip to lead a movement to oust long-serving authoritarian Prime Minister Hun Sen.

Sam Rainsy missed his self-declared deadline of returning to his home country on Saturday, Cambodia’s Independence Day, and his further plans are not clear.

He had been barred from entering Cambodia, but Deputy Prime Minister Sar Kheng said in a Facebook post that he was now welcome to return but would have to face justice in several concluded and pending legal cases.

While Kem Sokha and Sam Rainsy are political partners, they’re also rivals. There also are bad feelings between their respective supporters because of Kem Sokha’s willingness to stay in Cambodia while Sam Rainsy has been in self-imposed exile since 2015.

Kem Sokha’s eldest daughter, U.S.-based Kem Monovithya, has been especially outspoken in criticizing Sam Rainsy and his supporters for allegedly grabbing power at her father’s expense. She was formerly a spokeswoman for the party.

Kem Sokha is still barred from engaging in political activity, but his newfound freedom raises his profile as an alternative leader to Sam Rainsy.

Hun Sen, known over almost 35 years in power as a wily and ruthless politician, has a history of employing divide-and-rule tactics against his opponents.

Yesterday’s court order keeps several restrictions on Kem Sokha. He’s not allowed to travel outside Cambodia, and he must comply and cooperate with the court or the authorities.

The court declared that it acted after his lawyers said he needed medical care.

In a message posted on his Facebook page after the court’s action, Kem Sokha said he was still urging the court to drop the charges against him.

“I am expecting that the decision today is a first step, but I, along with other Cambodian people who have lost their political freedom, am still waiting for real justice,” he wrote. He also said he was planning a trip to meet his countrymen.

Kem Sokha faced an intense campaign of harassment in 2015, culminating with his arrest in September that year on a charge of treason. The main evidence against him was videos several years old that showed him at a seminar where he spoke about receiving advice from U.S. pro-democracy groups.

Even though his case has not yet gone to trial, he has been under house arrest, with his outside contacts tightly restricted.

His arrest was part of a wide-ranging crackdown by Hun Sen and his ruling Cambodian People’s Party in late 2017, which saw all critical media voices silenced in addition to the country’s high court dissolving the Cambodia National Rescue Party.

The party’s dissolution was seen as a political ploy to ensure victory by Hun Sen’s party in the 2018 general election by eliminating the only credible opposition group. The Cambodia National Rescue Party had mounted an unexpectedly strong challenge in the 2013 election.

Kem Sokha’s lawyer expressed disappointment that he was not freed unconditionally.

“We are not satisfied with the decision made by the court for our client, Kem Sokha,” Pheng Heng told The Associated Press. “We wanted him to be completely free with all charges dropped.” He said that Kem Sokha has a serious back problem that needs treatment by a specialist and possibly surgery.

Rights activists described the court’s order as a hollow gesture, meant to ease criticism as the European Union prepares to decide whether to withdraw preferential duty-free and quota-free status for imports from Cambodia because of its deficiencies on labor and human rights.

Cambodia is one of a number of developing nations with whom the EU has an “Everything But Arms” — or EBA — program granting preferential access to the European market for products other than weapons. Sopheng Cheang & Grant Peck, Phnom Penh, AP