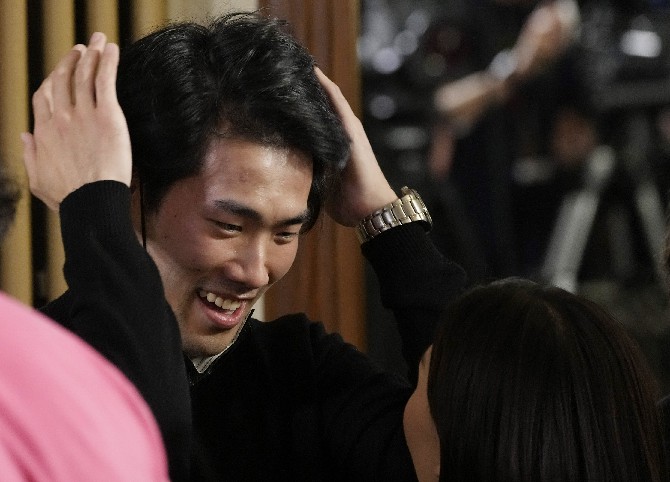 Bruce Liu Xiaoyu of Canada was named yesterday as the winner of the 40,000-euro ($45,000) first prize in the 18th Frederic Chopin international piano competition, a prestigious event that launches pianists’ world careers.
The announcement from the jury came just hours after Liu played as the last entrant among the 12 finalists, performing Chopin’s concerto in E minor, opus 11 with the orchestra at the packed National Philharmonic in Warsaw. His inspired performance was met with huge applause.
“Oh my god. I don’t know what to say, honestly,” Liu said after being name winner.
“We have been dreaming with all these people here for this prestigious stage,” the 24-year-old born in Paris said in English.
“Being able to play Chopin in Warsaw is one of the best things you can imagine, of course, so I’m truly honored for this award, of course, and for this jury’s trust and for all the warmth I have received in recent days,” Liu said.
The second prize and 30,000 euros went jointly to Alexander Gadjiev, representing Italy and Slovenia, and Kyohei Sorita of Japan. Gadjiev also won Krystian Zimerman’s prize of 10,000 euros for the best sonata performance.
The third prize of 20,000 euros was awarded to Martin Garcia Garcia of Spain, who also won the 5,000 euros prize for best concerto performance.
The fourth prize and 15,000 euros was shared by Aimi Kobayashi of Japan and Poland’s Jakub Kuszlik, who also won best mazurka performance prize and 5,000 euros. Italy’s Leonora Armellini was awarded the fifth prize of 10,000 euros, while the sixth prize and 7,000 euros went to Canada’s J.J. Jun Li Bui.
The first prize was funded by the office of Poland’s president, and other prizes were funded by the government, state culture institutions and by private individuals.
High ranking in the renowned competition opens the world’s top concert halls to the pianists and paves the way to recordings with best known record companies.
Jury head Katarzyna Popowa-Zydron said after the announcement that the level of the pianists was very high and made the award decisions very hard for the 17 jurors. She called the participants “wonderful young people.”
During the competition, she had said that apart from being excellent pianists, the participants should also show sensitivity and bring freshness to the music.
“I try to look for a rapport between the performer and Chopin,” Popowa-Zydron said in an interview. Music is a “message from a person, and (the musicians) should know what kind of person Chopin was.”
Bowing to their artistry, the jury allowed two more finalists this year than usual. The competition, held every five years, was postponed from 2020 due to the pandemic.
Chopin, Poland’s best known and beloved classical music composer and pianist, was born in 1810 in Zelazowa Wola near Warsaw to a Polish mother and a French father. He left Poland at 19 to broaden his musical education in Vienna and then in Paris, where he settled, composing, giving concerts and teaching the piano. He died on Oct. 17, 1849, in Paris and is buried at the Pere Lachaise cemetery. His heart is at the Holy Cross Church in Warsaw. MONIKA SCISLOWSKA, WARSAW, MDT/AP