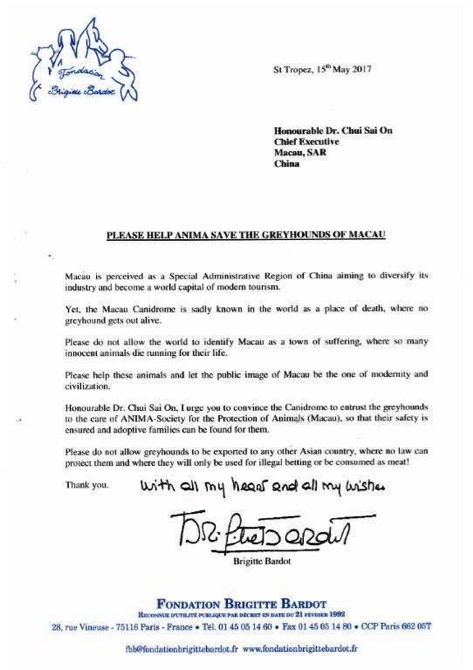 It has been revealed to the Times that a letter penned by a legendary French actress was delivered last week to the office of Chief Executive Chui Sai On, calling for his aid in coercing the Macau (Yat Yuen) Canidrome into turning over hundreds of greyhounds to local animal rights organization Anima (Macau).

Brigitte Bardot, a French actress, singer and fashion model who has dedicated decades of her life to animal rights activism, called for the Chief Executive to pressure the Canidrome into turning over the dogs, “so that their safety is ensured and adoptive families can be found for them.”

The letter, dated May 15, 2017, comes after other celebrities and animal activists worldwide have shamed the Canidrome and the Macau government over the treatment of greyhounds in the territory.

Last year, international observers described the facility as “the world’s deadliest greyhound racetrack,” due to the abnormally high number of euthanized dogs.

However, as the closure of the Canidrome became increasingly likely in recent months, activists changed their tone from condemnation to appeal.

“The Macau Canidrome is sadly known in the world as a place of death, where no greyhound gets out alive,” reads the letter signed by the 82-year- old activist. “Please do not allow the world to identify Macau as a town of suffering where so many innocent animals die running for their life. Please help these animals and let the public image of Macau be the one of modernity and civilization.”

Meanwhile, Anima (Macau) president Albano Martins told the Times yesterday that collaborating with well-known celebrities was the next stage in the organization’s plan to save the greyhounds.

“We have already won the first fight to close the Canidrome,” he said.

“Now our fight is to try to get the animals [into Anima’s care]. We are asking celebrities to convince the chief executive to convince the greyhounds to be delivered to us.”

Martins is working on other aspects of the plan to get the animals out of Macau, including the logistics behind their transportation. He explained that he is in talks with airlines and jetfoil operators regarding a method of transporting the greyhounds that will cause minimal discomfort.

Bardot’s letter also appealed for the chief executive “not [to] allow greyhounds to be exported to any other Asian country, where no law can protect them.”

Martins told the Times that this was intended to highlight the fact that most greyhounds at the Canidrome facility belong to private owners.

“The private owners can sell the animals to China or Vietnam after the Canidrome closes […] In principle they can do that. We are saying: Please, chief executive, ask them [the owners] not to do that.”

The leader of the animal rights group added that they will continue to pressure the Canidrome and the dog owners to voluntarily surrender their greyhounds to Anima.

ANIMA (Macau) says that Catherine Madry, the president of French greyhound protection group, Lévriers en Détresse (Greyhounds in Distress), will visit the local group this and next week to discuss the issue of greyhounds housed at the Canidrome. According to Anima, Madry has filed an application with the local group to adopt up to 100 of the greyhounds. Lévriers en Détresse rescues and rehabilitates greyhounds discarded at racing tracks. Madry has fought for the cause for more than 11 years, and has successfully imported greyhounds from the U.K. and Spain.