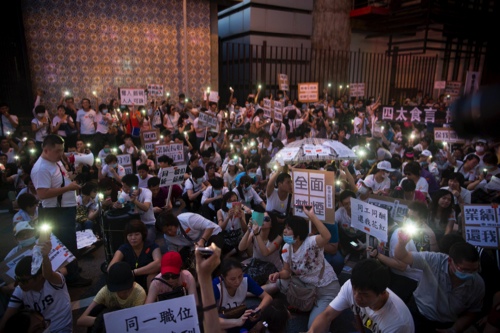 Macau casino revenue was worse than analysts estimated in August, falling a third straight month as China’s anti-graft campaign curbed gambling by VIPs. Casino shares dropped.
Total gross gaming revenue in the world’s biggest gambling hub declined 6.1 percent to 28.9 billion patacas (USD3.6 billion) last month, Macau’s Gaming Inspection and Coordination Bureau said yesterday. That compares with the median estimate of a 2 percent decrease from seven analysts surveyed by Bloomberg News.
Chinese President Xi Jinping’s probes into corruption and lavish spending have coincided with crackdowns by Macau’s casinos on methods some gamblers use to transfer money from China, crimping cash from high-rollers. Efforts by the resorts to shift tables and attractions to attract more mass-market visitors aren’t keeping pace with the decline in VIPs, who still account for about two-thirds of gaming revenue.
“China’s anti-corruption campaign seems to be keeping some high-rollers out of Macau, and that’s unlikely to change much in the fourth quarter,” said Philip Tulk, a Hong Kong-based analyst at Standard Chartered Bank. The number of visitors to Macau hasn’t changed much, while the mix of lower-end gamblers has increased, he said.
Sands China Ltd. dropped 3.2 percent and Galaxy Entertainment Group Ltd. fell 2.9 percent at the close of trading in Hong Kong, the worst two performers on the benchmark Hang Seng Index, which was little changed yesterday.
After doubling on average last year, shares of the six- biggest listed Macau casino operators have tumbled between 18 percent and 30 percent this year. The retreat compares with a 6.2 percent gain in Hong Kong’s benchmark Hang Seng Index.
The city’s casino revenue fell in June and July as business from Chinese high-stakes gamblers weakened and the World Cup tournament distracted some bettors. The 3.7 percent drop in June revenue was the first decline in five years for Macau, the only place in China where casinos are legal.
The property market has also become a drag on the world’s second-biggest economy, with new-home prices falling in July in almost all cities that the government tracks as tight mortgage lending deterred buyers.
Wynn Macau Ltd. declined 2.4 percent, MGM China Holdings Ltd. fell 3.5 percent, and Melco Crown Entertainment Ltd. dropped 3 percent. SJM Holdings Ltd. slipped 2.2 percent.
Macau casinos’ shares had slumped on Friday amid concerns protests by workers to demand higher pay and better working conditions may escalate into more serious industrial actions.
Some dealers working for gambling mogul Stanley Ho’s SJM called in sick or turned up late for work on Saturday as part of protests to demand pay raises, Ieong Man-teng, chairman of the Macau Gaming Industry Frontline Workers said. SJM didn’t immediately respond to a request for comment on the actions. Bloomberg