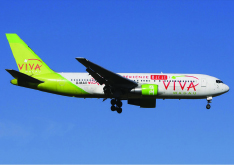 The Commission Against Corruption has found that no members of Industrial and Commercial Development Fund (FDIC), which granted five loans to failed airline Viva Macau in 2008 and 2009, “intentionally violated the criminal law.” However, the anti-graft authority flagged serious irregularities concerning the vetting and approval of the loan applications.
Between 2008 and 2009, the FDIC approved five loans to the now-defunct carrier worth a combined 212 million patacas. The airline declared bankruptcy in 2010.
Then, in 2018, the loans made by the FDIC were deemed irrecoverable, leading to an official investigation into possible malpractice at the Fund.
The CCAC investigation was based on information transferred by the FDIC in July 2018. The anti-graft authority conducted an inquiry to review the loan processes from the perspectives of criminal illegality, administrative illegality and disciplinary liability.
In its conclusion report, the CCAC said that the Fund “neither strictly required the completeness of the application documents nor carefully scrutinized the applicant’s repayment capacity. Also, there was lack of prudence in the requirement for and supervision of the guarantee for repayment.”
It holds the “public servants responsible for the vetting and approval, the follow-up on and the supervision of the loan applications by Viva Macau” and finds that they “failed in their duties.”
However, it stressed that nobody who was investigated from the fund “intentionally violated the criminal law.” Rather, the case may provide the impetus for legislative improvement, the Commission said.
In reviewing the case documents, the CCAC found that the documents of Viva Macau were disorganized and the bank transaction and accounting information was fragmentary. There were only unaudited financial reports among the accounting records. The controlling shareholder, Eagle Airways Holdings Limited, used promissory notes as guarantees, but the competent authorities had never carefully scrutinized its repayment ability. Neither had the financial status of Viva Macau been checked or followed up.
While Viva Macau had never fulfilled any of the loan repayment agreements, it repeatedly requested to extend the repayment periods and used part of the financial aids to repay the loans earlier provided by its executive members in their own names instead of using them directly for the purpose of improving the operation as required by the agreement signed with the FDIC. The company even failed to submit the loan spending report in time as required by the agreement.
These violations of loan agreement may have constituted relevant civil contractual liabilities.
According to the CCAC conclusions, “it seems that such negligent attitude of the members of the Administrative Council of the FDIC was of little avail to the uncooperativeness of Viva Macau, placing the Public Administration in a passive position in the entire incident.”
The CCAC considers that, regarding the acts carried out by the relevant authorities and personnel, there are some issues that deserve review and reflection in terms of administrative illegality, administrative irregularity and even concerning the need for legislative improvement.