The Chief Executive Ho Iat Seng has congratulated all those elected to sit in the Legislative Assembly (AL), following Sunday’s election.
Ho said that, looking ahead, the government will maintain good communication and cooperation with the Legislative Assembly, supporting the body’s work in its new term.
Ho’s message was made after the official results of the election were announced yesterday by the General Audit Committee of the Legislative Assembly Election. The results confirmed the 14 directly-elected legislators and the 12 seats for indirectly-elected members to the AL.
The top official said he looks forward to “working closely with the newly-elected AL members and with the Macau public in order to seize the historic opportunities created from the Guangdong-Macau Intensive Cooperation Zone in Hengqin.”
This also includes the facilitation of Macau’s economic diversification and for the newly elected to take part proactively in the development of the Guangdong-Hong Kong-
Macau Greater Bay Area. LV 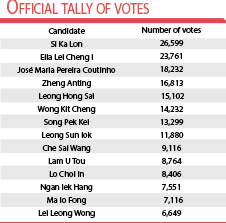