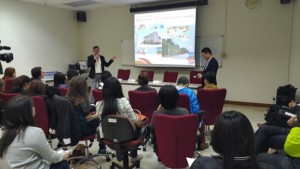 Evacuation projects carried out by third parties constitute 40 percent of the city’s total cable failures that lead to power blackouts, Companhia de Electricidade de Macau (CEM) revealed yesterday during a press briefing where the company’s maintenance plans were presented.
In response to the growing demand for electricity consumption, the public utility company has planned on investing in electricity network expansion and upgrades. Over the next three years, CEM is also expected to build: two primary substations for the light railway transit (LRT) system, one each in Taipa and Cotai; two for the city’s hospitals; and also three in the district of IIha Verde.
During the presentation, Billy Chan, CEM’s senior manager, told media that the average length of power outage last year was 1.34 minutes, which is far shorter than in many other regions. The past five years have also seen a declining tendency in cable malfunctions. Currently, the company has a set site aside five mobile equipment units as contingency measures, guarding against any unexpected electricity failures. According to the senior manager, the city’s cables are under supervision by the company through some preventive methods, such that one can identify the exact location of the failure.
“We also have online monitoring technology to monitor the health of the cable, for example, if the cable [has issues], like being damaged slightly. This technology principally can provide a picture to us to identify the location, and also identify the remaining line of the cable, so we can prepare ourselves for repair and also replacement,” Billy Chan said. According to him, cables found to carry potential risks are closely monitored around the clock. Repair work would be required as appropriate, depending on the circumstances.
Moreover, all the cables, installed underground, generally undergo routine inspections and “diagnosis,” as conducted by the team every five years. However, another CEM representative present at the presentation, Simon Young, said that regular maintenance and reviews were subject to initial inspection, which decided when to carry out the actual maintenance on the cables.
The city’s current electricity cables mainly came from Europe, the United Sates and South Korea. In fact, according to two representatives, the cable suppliers claimed that their products could last 30 years without inspection and maintenance. Nevertheless, under different circumstances and affected by various external factors, Simon said that regular works had to be done to prevent any unexpected failure. The pair also said that the current scheme of maintenance was likely to be the most optimal, considering the costs and impacts to the cables involved in the maintenance. Staff reporter

The company’s advisor to the executive committee, Iun Iok Meng, revealed that there is room for reduction in tariffs in the coming quarter. “The tariff adjustment index is a mechanism that has been running for many years, [and it] successfully stabilizes the tariff. In the second quarter, there will likely be a reduction,” the committee advisor said.

During The press presentation, CEM responded to media enquiries regarding last week’s power outage in the border gate area, claiming that the cables concerned, which were installed in 2009, belonged to a new batch that held no underlying risks. Moreover, no prior record suggests that the particular district has ever suffered from a termite invasion. CEM described the incident as first-time event. In 2008, when purchasing a new batch of cables, the utility company responsible for installation had already requested for the cable suppliers to provide anti-termite measures, such as the application of pesticides to the cable surfaces. The company also made assurances that his team would take “corresponding measures” in the future to maintain the stability of the electricity supply in that region.