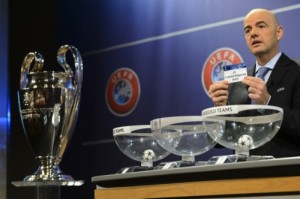 Real Madrid’s Champions League title defense takes shape today at one of the most open draws in years. Madrid, Barcelona, Bayern Munich and Chelsea — the past four winners — are among the eight top-seeded clubs in the 32-team draw. However, lower-ranked seeding pots loaded with big spenders returning to the Champions League after years away promise to deliver trickier than usual groups.
Five-time winner Liverpool will make its first appearance since 2009 in Pot 3, decided by rankings over five years of UEFA competition results.
Manchester City, Juventus and Paris Saint-Germain — champions of England, Italy and France — are in a strong Pot 2, which also includes 2013 finalist Borussia Dortmund.
Former finalists Monaco and Roma are the glamor options sharing Pot 4 with BATE Borisov and Maribor. The four-team groups, which kick off Sept. 16, cannot include two teams from the same country.
Madrid could start its quest for a record-extending 11th European title in a blockbuster group with PSG, Liverpool and Roma.
Still, no team will beat the defending champions for star power.
Madrid rode its forward line of Cristiano Ronaldo, Gareth Bale and Karim Benzema to the title last season, and now has added World Cup stars James Rodriguez of Colombia and Toni Kroos of Germany.
Barcelona countered buying Luis Suarez from Liverpool to join Lionel Messi and Neymar in a forward line of South American superstars.
Suarez will miss three Champions League matches while serving his four-month FIFA ban for biting Italy defender Giorgio Chiellini at the World Cup, though a reunion with the Juventus player is possible later in the group stage.
Bayern, the 2013 winner, is among only three national champions in the top-seeded ranks, along with Atletico Madrid and Benfica.
Benfica and FC Porto give Portugal two top-seeded teams despite combining for only one Champions League quarterfinal appearance in the past five years. Both added ranking points from good Europa League runs.
Arsenal can clinch the final place in Pot 1 by beating Turkish club Besiktas in one of five playoffs. Schalke is next line to be top-seeded.
Steaua Bucharest can also advance, possibly making it 11 former European champions in a draw which counts Manchester United and AC Milan as notable absentees.
Man City and PSG are still building their Champions League pedigree and rankings after spending heavily to catch more established rivals.
As a result, UEFA punished both for breaching Financial Fair Play rules by limiting their squad quota of senior players to 21 instead of 25. Zenit St. Petersburg, also in Pot 2, is limited to 22 senior players.
Another UEFA order means Ukrainian and Russian teams cannot play each other for security reasons. That will separate Shakhtar Donetsk in Pot 2 from CSKA Moscow in Pot 3.
Shakhtar, whose expensive stadium has been damaged in the conflict in eastern Ukraine, must also play its home matches in the western city of Lviv.
The 32 teams will share nearly 1 billion euros (USD1.34 billion) in UEFA prize money.
UEFA pays a basic 8.6 million euros ($11.5 million) fee for entering the group, plus 1 million euros ($1.34 million) per win and 500,000 euros ($670,000) per draw. Teams also get a share of television rights money.
The final will be played at the Olympic Stadium in Berlin on June 6 — the latest date since the first European Cup final on June 13, 1956. AP