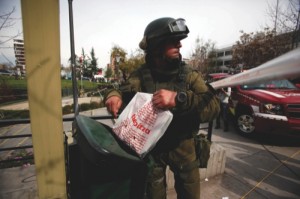 Chile’s president increased security measures and expanded powers to investigate on Tuesday (yesterday, Macau time), a day after a bomb injured 14 people in the capital in the worst attack of its kind in the country since democracy returned in 1990.
Officials said they were looking into whether anarchist groups believed responsible for a wave of bombings in Santiago were behind Monday’s attack at a fast-food restaurant next to a busy subway station.
“Those who carry out these acts think they will frighten us, but we’re not going to let a small group of terrorists and cowards scare the vast majority who want a peaceful country,” President Michelle Bachelet said after she led a high-level security meeting.
“I have instructed the interior minister to reinforce security on the subway system and in places where lots of people gather,” Bachelet said. “The coordination between police and intelligence organisms will be key to obtaining concrete results in the investigations. Our hand will not tremble with these sorts of acts.”
Santiago is one of the safest capitals in Latin America, but Chileans have been shocked by at least 29 bombs that have been planted across the city so far this year. Some have not gone off, and none of the earlier bombs caused any injuries.
In some cases anarchist groups have said the bombs were planted to demand freedom for two Chilean anarchists imprisoned in Spain for an explosion in a cathedral in Zaragoza last year.
Fire officials say the injuries in Monday’s blast apparently were caused by fragments from a fire extinguisher filled with gunpowder that detonated in a trash bin. The prosecutor investigating the blasts has said the explosive device was similar to the ones used in other recent attacks.
“We’re following the line that they are anarchist organizations. Their structure doesn’t allow for fast and more precise results on who’s behind these attacks,” said acting national prosecutor Alberto Ayala.
Chile’s government has invoked the country’s tough anti-terror law that lets suspects be held in isolation without charges and permits secret witnesses in investigations.
Police agents patrolled the Santiago subway on Tuesday, and authorities removed or covered trash cans as a precaution.
The latest blast occurred just ahead of the 41st anniversary of the Chilean military coup that ousted socialist President Salvador Allende and began the bloody 1973-90 dictatorship of Gen. Augusto Pinochet. Chileans remain divided over Pinochet’s rule, and protests at the coup’s anniversary often turn violent. Luis Andres Henao, Santiago, AP