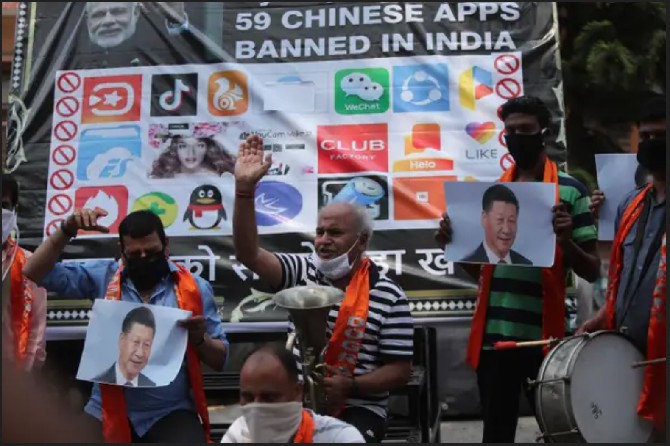 Activists of Jammu and Kashmir Dogra Front shout slogans against Chinese President Xi Jinping during a protest in Jammu, India

China accused India yesterday of improperly disrupting activities by Chinese companies in the midst of tensions over a bloody clash between forces along their disputed border.
China has not taken any retaliatory measures in response to India’s actions and a return to normal is in the best interests of both countries, Commerce Ministry spokesperson Gang Feng told reporters, according to the ministry’s website.
“It is hoped that Indian side will immediately correct the discriminatory practices against China and Chinese enterprises,” Gao said. New Delhi’s moves were in violation of World Trade Organization rules and India’s commitment to global trade’s rules-making body, he said.
Earlier this week, India said it had banned 59 Chinese-owned apps, including TikTok, while Chinese companies are being blocked from participating in highway projects and are banned from investing in micro, small and medium-sized enterprises.
Indian protesters have been calling for a boycott of Chinese goods since the June 15 confrontation along the border.
India’s Prime Minister Narendra Modi quit ubiquitous Chinese social media platform Weibo to send a strong message to Beijing on the border issue, economic front and at “personal level too,” the Press Trust of India news agency cited his party leader B.L. Santhosh as saying.
On Wednesday, Indian and Chinese military commanders met for a third time in an attempt to ease a monthlong face-off over disputed territory and emphasized the need for a phased deescalation of tensions, a senior Indian army official said.
The official said more meetings are expected, both among military officials and diplomats, to reach a mutually agreeable solution and ensure peace along their disputed “Line of Actual Control.”
The latest meeting took place on the Indian side of the disputed border on Tuesday, he said.
The official spoke on condition of anonymity as he was not authorized to talk to reporters.
India’s army chief, Gen. M.M. Naravane, visited the area in Ladakh last week to review his troops’ preparedness after hand-to-hand combat between Indian and Chinese soldiers on June 15 left 20 Indians dead. Indian officials say there were casualties on the Chinese side as well, but there has been no confirmation by Beijing.
Indian officials say the current standoff began in early May when large contingents of Chinese soldiers entered deep inside Indian-controlled territory at three places in Ladakh, erecting tents.
They say the soldiers ignored repeated verbal warnings, triggering a yelling match, stone throwing and even fistfights in at least one place along Pangong Lake, the site of several such confrontations in the past.
The Galwan Valley, where the clash occurred, is part of a remote stretch of the 3,380-kilometer “Line of Actual Control” — the border established following a war between India MDT/AP