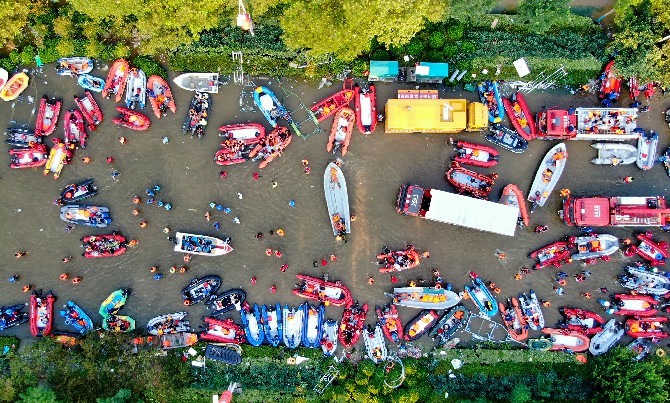 China has earmarked 3 billion yuan (about 463.43 million U.S. dollars) to support flood control and disaster recovery in the central province of Henan, the Ministry of Finance said.
The central financial reserve allocated the funds, which would also go towards post-disaster reconstruction, the ministry said on its website.
More financial support will be provided based on verification results of the disaster, the ministry said.
The ministry urged the local government to allocate the funds in time and do a quality job in flood recovery.
The death toll from torrential rain in Henan has risen to 71 as of Tuesday noon, said the information office of the provincial government at a press conference on Tuesday.
China is working to ensure the supply of seeds for agricultural recovery in central China’s Henan Province, where the torrential rainfall caused casualties and property losses.
Enterprises in Henan have been active and can provide seeds which are expected to cover 3.36 million mu (224,000 hectares) of land, said the Ministry of Agriculture and Rural Affairs Tuesday.
Other regions including Shandong, Sichuan and Hebei will provide seeds that could cover 1.37 million mu of land.
The country will release seeds from its national reserves and provide 100,000 kg of vegetable seeds which can cover 240,000 mu of land and 50,000 kg of mung bean seeds which can cover 30,000 mu of land, the ministry said.
Enterprises from regions such as Jiangxi, Shandong, Beijing and Shaanxi have donated about 7,200 kg of seeds as of Tuesday.
The ministry said it will work with Henan closely to ensure seed supply for agricultural recovery. MDT/Xinhua