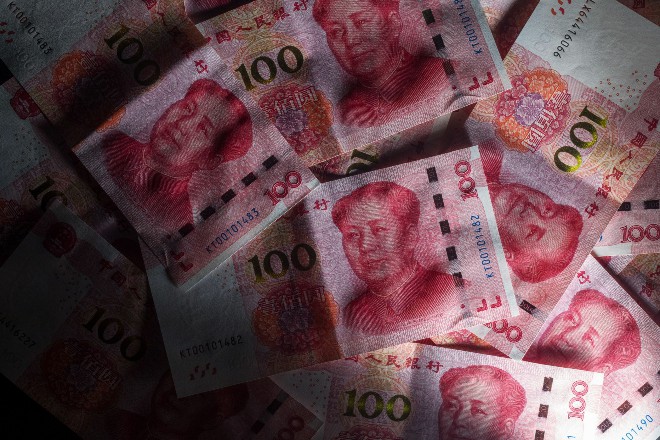 China’s central bank took its first concrete steps to cushion the economy and plunging markets from the blow of a spreading new virus, providing short-term funding to banks and cutting the interest rate it charges for the money.
The People’s Bank of China added a net 150 billion yuan ($21.4 billion) of funds on Monday using 7-day and 14-day reverse repurchase agreements. The rate for both was cut by 10 basis points, driving down the cost of the money to “ensure ample liquidity during the special period of virus control,” it said in a statement. PBOC adviser Ma Jun indicated he expects further rate cuts later in the month.
The cash injection was part of a raft of supportive measures announced over the weekend to soften a market sell-off and help firms affected by the disease outbreak and extended holiday. While the government said Monday that it’s confident it can minimize the economic impact of the coronavirus, the central bank and regulators may well continue to step up support as the effects of the epidemic become clearer.
“It’s a tricky moment, and the central bank needs to wait to see how it plays out,” said Nie Wen, an economist at Huabao Trust Co. in Shanghai. “It has to make sure the economy can grow steadily while leaving policy room for the future – the next week or two will be crucial for them to decide whether the economic shocks would be temporary or extend over the mid-term.”
A senior Chinese official on Monday acknowledged the impact on the economy, especially on tourism, transportation, hotels, catering, movies and entertainment, adding those difficulties are “temporary.”
“Many people tend to use SARS in 2003 as a reference to gauge the economic impact. But China’s economic strength, material foundation and ability to respond to emergencies are significantly stronger than in 2003,” Lian Weiliang, deputy head of the National Development and Reform Commission said at a press conference on Monday. “We are fully capable and confident to minimize the impact of the epidemic on the economy.”
Lian also said that while the government would work to ensure the coronavirus didn’t spread further, it would encourage major projects and enterprises in good condition to resume work and production. Policy makers will also roll out measures to soften the impact of the epidemic on a case-by-case basis, especially to try to help industries that have been hit hard, Lian said.
Vice Commerce Minister Wang Bingnan said at the same press conference that many exporters in China have been resuming production, and local governments have been issuing policies to help small and medium-sized companies.
Authorities have pledged to provide abundant liquidity and there seems to be more easing measures in the pipeline. In an interview with the PBOC’s Financial News newspaper, central bank adviser Ma Jun said he expects the PBOC to push the interest rate for new loans lower and to also cut the rate for medium-term funding in February if it uses that facility mid-month, as it usually does.
If that were to happen, it would be a change to a “rather strong” easing bias for the central bank, according to Peiqian Liu, China economist at Natwest Markets Plc in Singapore.
Having moved away from its historic one-year lending rate, China’s central bank now conducts policy with a range of instruments that add short and mid-term funds to the market and banks at varying interest rates. The new loan prime rate – which is based on the interest rate for one-year loans that 18 banks offer their best customers – is set to be announced on Feb. 20.
Chinese stocks, the yuan and commodity futures sank Monday as trading restarted following the holiday break. The onshore bond and currency markets also opened Monday for the first time since Jan. 23, with the yuan weakening through 7 per dollar. The yield on China’s most actively traded 10-year government bonds dropped the most since 2014.
After markets closed, the central bank affiliated Financial News published a commentary saying “the sell-off in the stock markets is caused by many irrational factors, or even a panic triggered by ‘herd effects.’” The impact from the epidemic is “temporary” and “limited” and the first quarter’s contribution to full-year growth is normally small, according to the article.
“The swift response by the PBOC suggests it is very keen to support the economy by lowering the overall cost of funding,” said Becky Liu, head of China macro strategy at Standard Chartered Plc. “Cash bonds will likely continue to outperform in the near term,” with the 10-year government yield likely to drop to 2.6%, she said after the bank’s actions in the morning. That level would be the lowest yield since 2002. Tian Chen, Yinan Zhao & Miao Han, Bloomberg