China influence on display as leaders converge on island nation 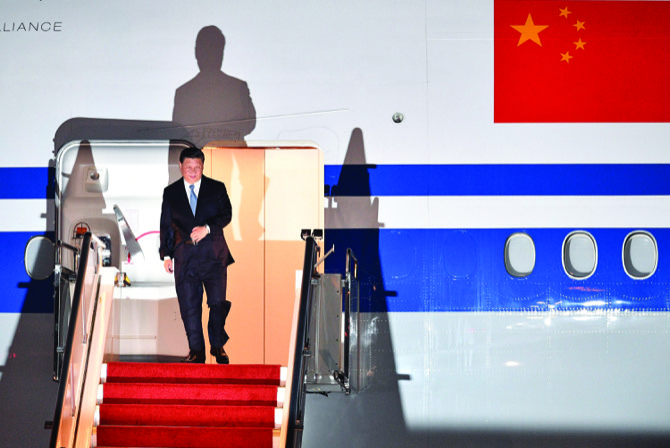 Chinese President Xi Jinping didn’t arrive in Papua New Guinea until late yesterday, but his presence has been felt there for some time.

China has been pouring money into the Pacific Island nation, injecting at least USD5.9 billion of infrastructure spending since 2011 into an economy smaller than any U.S. state. The investment has highlighted the region’s growing status as a strategic battleground between China and U.S. allies ahead of Asia-Pacific Economic Cooperation summits, which are bringing Xi, Russia’s Vladimir Putin and Vice President Mike Pence there this week.

APEC attendees arrived in the capital Port Moresby aboard shuttles donated by China. A banner advertising the state-owned China Railway Group flew over a construction site near cruise ships being used to house delegations. Other Chinese firms, including CreditEase Corp., Beijing Rogrand E-Commerce Co. and Jian Nan Chun, a signature maker of baijiu alcohol, are featured on the event’s sponsors list.

With President Donald Trump’s absence fueling doubts over his administration’s commitment to Asia, Xi – making the first such visit by a Chinese president – is seizing the opportunity to assert his country’s influence. Xi is hosting Pacific Island leaders at a special summit, a show of strength in a resource-rich region eager to benefit from his signature Belt and Road trade and infrastructure initiative.

Prime Minister Peter O’Neill said before the summit that Papua New Guinea “is not interested in geopolitics” and was “very much interested in doing business with everyone.”

Chinese Foreign Ministry spokesman Lu Kang told a regular briefing last month the support had been provided during the APEC meetings at Papua New Guinea’s request and that Beijing would “attach no political strings and never impose our own will on others.” Still, Xi highlighted more permanent support in editorials published in local newspapers yesterday.

“Our relationship has stood the test of changing international circumstances and stayed as strong as ever,” Xi wrote ahead of his arrival in the crime-stricken capital, where the conference begins Saturday. Hydropower stations, hospitals and school dormitories financed by Chinese loans have become landmarks across the country, Xi said, adding that Chinese companies have helped construct roads, bridges, airports and docks.

In his article, Xi expressed appreciation for diplomatic allies in the South Pacific for their “valuable support of China on issues involving China’s core interests and major concerns” – a veiled reference to Taiwan. The democratically run island – which China considers a province – maintains diplomatic relations with six Pacific Island countries, crucial allies amid Beijing’s recent efforts to lure away those who remain.

PNG is the first stop of Xi’s Asia-Pacific tour – he will also visit Brunei and the Philippines.

“One of China’s major goals is to win friends in a competition with Taiwan,” said Yu Changsen, executive director of China’s National Center for Oceania Studies at Sun Yat-sen University. The two “have had a diplomatic battle in this region for a long time.” Bloomberg