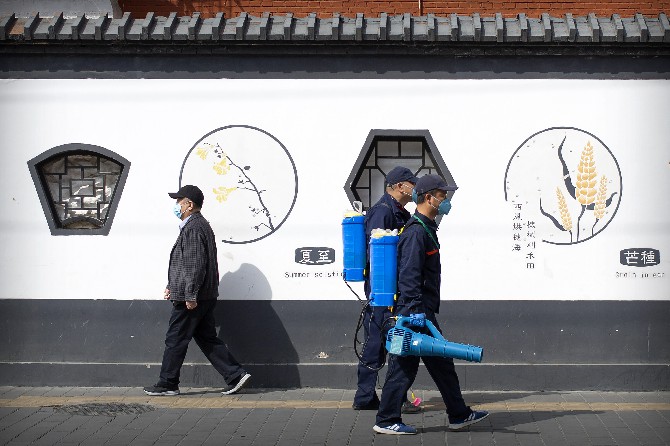 China said that it’s put 1,541 people infected with the novel coronavirus but who don’t have symptoms under observation as of March 30, a much-anticipated announcement which helps provide a deeper picture of the scale of the country’s epidemic.
It was unclear from the statement if that number was only of people currently in medical quarantine or if it included those who were symptom-free but have since recovered and been released. Of the cases, 205 were found among people entering China from overseas, according to a statement on China’s National Health Commission website.
China’s total count of confirmed Covid-19 infections stands at more than 81,000, but the vast majority have recovered and been released. The country still has 2,161 cases in hospital as of March 30, according to health commission data.
The publication of the number of asymptomatic infections comes a day after Chinese Premier Li Keqiang urged local officials to prioritize efforts to track and expand the screening of symptom-free carriers amid a growing chorus of domestic and international criticism of China’s data on the outbreak.
In China, people who test positive for the virus but don’t have any symptoms are not classified as confirmed cases. This runs counter to the practice in countries like South Korea, Japan and Singapore, where all patients who test positive are included in official tallies of total cases, regardless of whether they have symptoms such as a fever or cough.
China says it tracks and quarantines asymptomatic cases and reclassifies them as confirmed cases if and when they develop symptoms. But concern over China’s refusal to disclose the number of symptom-free carriers has grown as researchers have found that these patients can play an out-sized role in spreading the pathogen to others, since there’s no easy way to tell they’re sick.
Asymptomatic cases are typically found only if people are tested because they’ve been in close contact with confirmed cases, in cluster infections and through contact tracing. Countries with limited testing capacity are more likely to not track symptom-free cases as testing is usually reserved for those with obvious symptoms.
Cases of asymptomatic virus infections are still being found even after China said its daily confirmed case tally hit zero for the first time two weeks ago, local magazine Caixin reported. It’s fueled doubt over whether the epidemic that broke out in the central Chinese city of Wuhan in December is truly over.
While it’s unclear what proportion of infected people do not display symptoms, early signs are that it could be a substantial number and that these stealthy carriers are still infectious — a key reason why the pandemic has spread so widely across the world in a short time.
As many as a third of the people in China who test positive show delayed symptoms or none at all, the South China Morning Post reported earlier this month, citing classified data from the Chinese government. About 20% of those who tested positive for the virus in South Korea end up showing no symptoms at all during their hospital stays, according to the country’s CDC chief, Jung Eun-kyeong.
Stepping up control of asymptomatic cases will help reduce loopholes in the country’s epidemic control efforts, according to an earlier statement released on the website of the State Council, China’s top administrative body. MDT/Bloomberg